Directed by Concordia graduate André Turpin, BFA 89, Endorphine is a film that welcomes each viewer’s own interpretation.

“It’s meant to be open-ended — a bit puzzling,” says Turpin of the movie, which had its world premiere at the Toronto International Film Festival in September 2015. The feature’s wider release, including in Montreal, was on January 22.

“The movie can be about one person at three points in her life, or three parallel stories occurring simultaneously,” says Turpin of the film’s double-layered structure.

Shot in Montreal in July and then December 2014, Endorphine features three characters named Simone, each played by a different actress. Simone at age 13 is given life by Sophie Nélisse, who rose to fame after co-starring in the 2011 film Monsieur Lazhar.

If the movie is surreal, Turpin’s source of inspiration helps explain why.

“David Lynch definitely influenced me and this film,” Turpin says, referring to the American director known for non-linear pieces such as Mullholland Drive (2001). “When you see a David Lynch movie, you remember it — I wanted to do something like that.”

Endorphine is the Quebec City-born, Montreal-based Turpin’s third feature-length film in the director’s chair. His debut, Zigrail, was released in 1995. 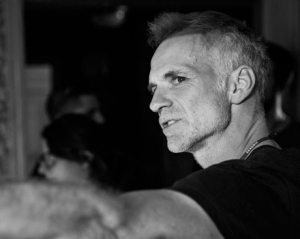 André Turpin, BFA 89, director of the newly released Endorphine, has worked as a cinematographer with some of Quebec’s best-known filmmakers, including Denis Villeneuve and Xavier Dolan.

“As a director, I’m extremely picky of the projects I accept,” says Turpin. “It has to get into my blood.”

In the role of cinematographer, Turpin’s profile is more extensive. He boasts more than 30 movies to his credit — framing scenes for big name collaborators that include Quebec directors Denis Villeneuve and Xavier Dolan.

“They’re both people who control the whole filmmaking process — they have an all-encompassing vision,” says Turpin on why he’s typically eager to work with Villeneuve and Dolan.

Turpin won two Genie Awards for best cinematography — given by the Academy of Canadian Cinema and Television. The first was for Maelström in 2000 and the second for Incendies in 2010, both directed by Villeneuve. The latter was Canada’s Oscar nomination in the Best Foreign Language Film category that same year.

Among Turpin’s projects with Dolan are Tom at the Farm (2013) and Mommy (2014). Turpin was the cinematographer on the music video for British singer Adele’s single “Hello,” directed by Dolan and released in October 2015.

The video also has over a billion views on YouTube. “My goal isn’t to make things everyone will see,” says Turpin. “I care about quality and not really the glamour part.”

Turpin notes that his time at Concordia’s Mel Hoppenheim School of Cinema was a formative period for him.

“What’s great about the film production program is that it’s practical,” says Turpin. “You actually make movies while you’re a student.”

Turpin returned to his alma mater as a part-time instructor in 1992, teaching a course to first-year students on his craft.