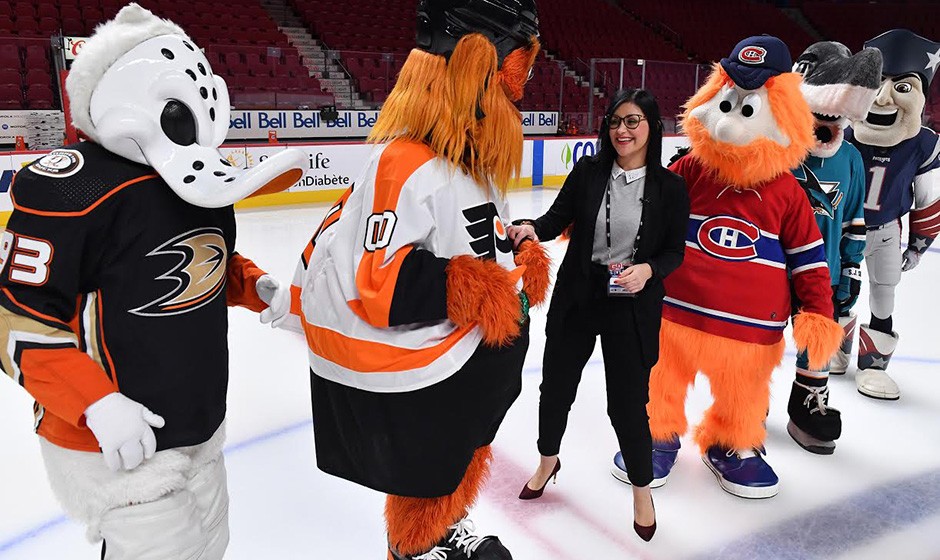 Since the advent of the COVID-19 pandemic, few domains have been affected quite like the world of live sports.

Games and matches across North America — and the world — were cancelled or held without fans in the stands. The ripple effect has had major consequences, well beyond the turf, court or ice.

“In Montreal, hockey is a religion,” says Cynthia Paquin-Lepage, BA 08, the game entertainment manager for the Montreal Canadiens. “It was tough not to have that anymore.”

The Bell Centre, the home of the Canadiens, typically tops the NHL in total attendance every year. The inability to host fans in person was a tremendous loss.

“You can say that what we do is not an essential service,” says Paquin-Lepage. “But hockey unifies the city in a lot of ways.”

‘More than a game’

Paquin-Lepage is no stranger to adversity. She barely spoke English when she enrolled at Concordia but was determined to succeed as a Department of Communication Studies student. 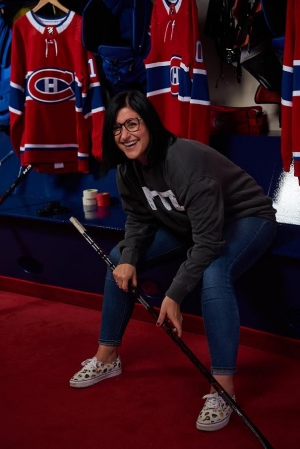 Paquin-Lepage’s job is to put on a show at Canadiens home games. Photo: Cynthia Paquin-Lepage/Montreal Canadiens

“I knew I wanted to work in production,” she says. “And I was going to do whatever it took to get there.”

Her breakthrough came when the U.S.-based company she worked for post-Concordia contributed to the Canadiens centennial, which was celebrated throughout the 2008-09 season.

“I translated interviews and worked on a film,” she says. “After I completed the project, I got homesick for Montreal.”

Now the club’s manager for game entertainment, Paquin-Lepage takes care of the live fan experience. This includes the pre-game show and interactions during commercial breaks and other stoppages.

“We want it to be more than just a hockey game,” she says. “We see it as a show. Whether you’re a hockey fan or not, the goal is for everyone to have a good time.

“There are roughly 22,000 people in the stands — we want every single one of them to go home happy.”

The future of live sports

The impact of COVID-19 on Paquin-Lepage’s job has been severe. The rescheduled NHL playoffs took place without fans in attendance.

The Canadiens were eliminated on August 21, but will be returning soon for the 2020-21 season.

“We have no clear answer on what’s happening. It keeps changing,” Paquin-Lepage says.

Nevertheless, her primary focus is still with the fans.

“We’re working on ways to translate the live experience to home. The Canadiens and other teams are finding creative ways to engage with their fans. It’s very different without them, so we need to make it interesting for them but also for the players.”

The proud Concordia alum hopes to use this opportunity to expand the horizons of her job.

“What matters most for now is everybody’s health. Beyond that, we need to step out of our comfort zone and reinvent the possibilities of live sports production.”