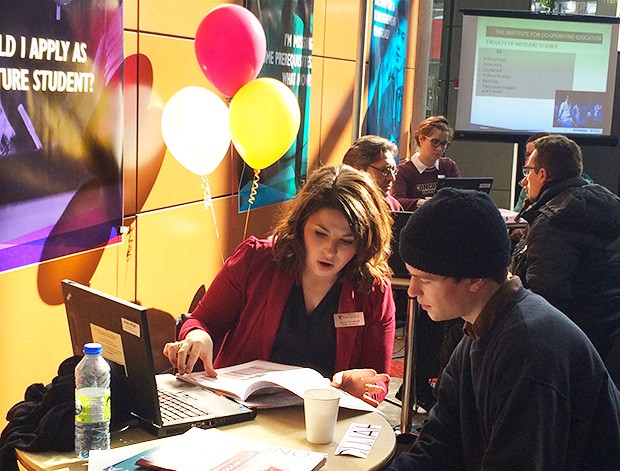 A severe cold warning was no match for the enthusiasm of future Concordians, who came to the university en masse on Saturday, February 13 for Admissions Information Day and Portfolio Day.

“Sure enough, just like in previous years, people started showing up before the event even started,” says Savvy Papayiannis, manager of Student Recruitment. “By 11 a.m. we had served over 400 cups of coffee and tea.”

Early indications are that more than 2,000 future students, their family and friends came out to the event, a 15 per cent increase over last year’s estimated attendance of 1,800.

A highlight of the day, says Matthew Stiegemeyer, director of Student Recruitment, was a new space dubbed “Which program is right for me?” With café-style seating in an open area, the set-up was designed to be conducive to one-on-one conversations.

“Conceptually, the space could have been called ‘let us teach you the right questions to ask,’” says Stiegemeyer. “We wanted to acknowledge that a number of students don’t know what they want to study, or how to order the choice of programs they’re considering. They’re not quite ready to talk to an admissions counsellor, because their situation is not clear-cut.” 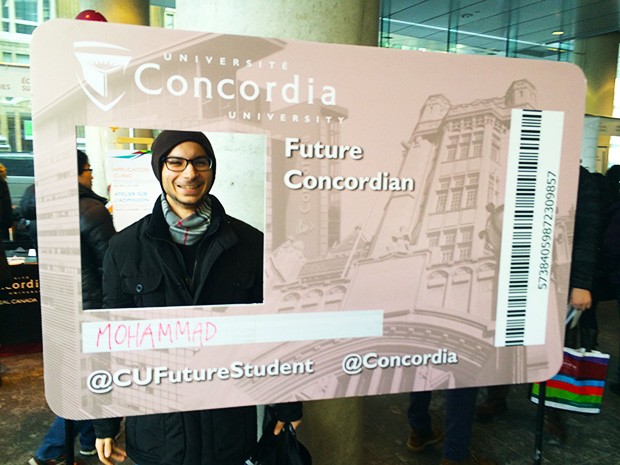 A future John Molson School of Business student picturing himself on the road to reaching his academic and professional goals. | Photo by Sarah Buck

John Beaton, manager of International Student Recruitment, says that’s particularly key for people whose academic history means they could benefit from tailored advice. “You have students from all different backgrounds, including mature students and students who’ve just arrived in Canada.”

Beaton, who leads the Asia recruitment team, says he got the chance to speak with an incredible mix of people throughout the day, including two young women from Syria who arrived in September and another recent immigrant from Benin.

“Communicating with students by putting on a presentation is great too, but you don’t get quite the same ability to interact,” says Beaton. “When you’re one-on-one at a table with a cup of coffee, people tend to open up a bit more. And that’s when you can really find out about their situation and guide them in the right direction.”'

The application clinic, held in a computer lab with 24 workstations, was another high-traffic area during Admissions Information Day. In response to high demand, admissions staff opened up a second lab. “There was great energy and effort,” says Stiegemeyer. “We had people applying at 10 a.m., and we had people applying when we closed up at 4 p.m.”

With the one-day event in the rearview mirror for another recruitment cycle, the focus is on helping future students get their applications in ahead of the March 1 deadline.

Recruiters are running a series of application clinics at the Welcome Centre, starting Wednesday, February 17. Future students can drop by for in-person guidance weekdays between 9 a.m. and 6 p.m. The Welcome Centre will be open on Concordia President's Holiday, Friday, February 26.