Let’s talk about the creative process 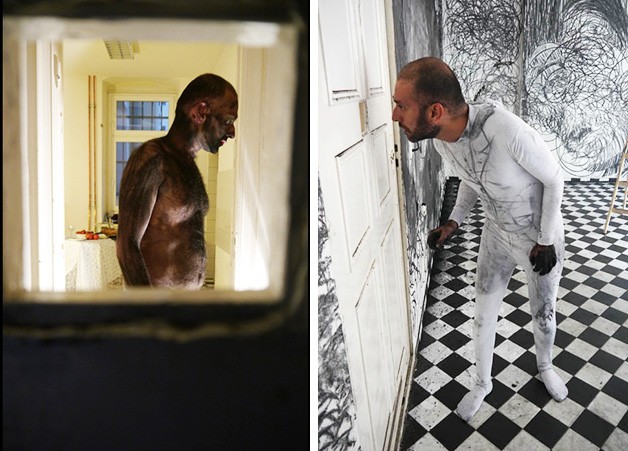 Artist Nihkil Chopra's live drawings and paintings often take up to 36 hours to complete. | Images (from Broken White III, 2011) courtesy of the artist

Concordia’s Conversations in Contemporary Art (CICA) is back in session this fall with Tammer El-Sheikh at the helm, and a collection of six visiting artists and lecturers.

El-Sheikh, an assistant professor in the Department of Studio Arts, is taking over CICA from Ingrid Bachman. “I’m really excited about the readings and the guest presenters, but I especially look forward to working with a small group of talented MFA students in a seminar environment,” he says.

The course, which is sponsored by the Studio Arts Master’s program, is unique in that it’s a combination of a graduate-level seminar and a visiting artist lecture series.

Nihkil Chopra from Mumbai, India, Cuban artist Sandra Ramos, and Canadians Rebecca Belmore, Shary Boyle, Chantal Pontbriand and Yassin Alsalman (better known as rapper the Narcicyst) will speak to students and members of the public about their work and various facets of art.

“The choice of speakers working in various disciplines reflects the range of approaches to art-making within the Studio Arts Department,” El-Sheikh says.

The visiting-artist series is just one component of CICA. El-Sheikh aims to have students “consider the temporality and geopolitics of contemporary art and its relation to modern art history” by not only listening to what the artists have to say, but also putting it in a broader context.

El-Sheikh’s challenge is to connect all the dots between the speakers, the students, the students’ artwork, the coursepack material and the overarching themes within each of those elements.

Rebecca Belmore's work is “stark and dramatic, difficult and beautiful,” says Tammer El-Sheikh. | Image (from Fringe, 2008) courtesy of the artist

Chopra, who will be in Montreal to perform at Concordia’s FOFA Gallery, will kick off the CICA series by speaking about his long career in performance and art creation.

El-Sheikh says getting the Indian artist — who is known for his live drawings and paintings that often take up to 36 hours to complete — was a major coup for the university.

“Chopra’s visit serves a major pedagogical goal of the (CICA) seminar… and of Concordia’s Department of Studio Arts in general, namely to keep track of developments in contemporary art in a globalized context,” El-Sheikh says. Chopra will speak on Thursday, Sept. 17 at 6 p.m. in the York Amphitheatre, located on the 1st floor of the Engineering, Computer Science and Visual Arts Integrated Complex (EV 1.615).

On Oct. 1, curator, critic and writer Chantal Pontbriand will speak about her experience as a founding editor of the now-defunct Montreal-based art magazine PARACHUTE.

Pontbriand is a recipient of the Governor General Award and was recently given an honorary doctorate by Concordia for her pioneering work both with the magazine, and in art curation.

“PARACHUTE was a major source of information about contemporary global art for an entire generation of artists, art historians, curators and writers,” El-Sheikh says.

The Narcicyst, an Iraqi-Canadian journalist and hip-hop MC, will lend an important political perspective to the series when he speaks to students and members of the public on Oct. 15.

“In his music he deals with the problems of political and economic marginalization among visible minorities in Canada, and within the diaspora,” El-Sheikh says.

Also bringing a political angle to the series is Havana- and Miami-based artist Ramos, who has presented in prestigious venues such as the Venice Biennale and the Museum of Modern Art.

“Ramos is ideally positioned to comment on the post-Cold War politics of migration,” El-Sheikh says. Ramos will speak on Oct. 29.

Rounding out the speaker series are Rebecca Belmore, who will speak Nov. 12, and Shary Boyle, who will speak November 26. Belmore is an aboriginal multidisciplinary artist whose art often reflects various issues felt by Canada’s native populations. “Her work is stark and dramatic, difficult and beautiful,” El-Sheikh says.

Meanwhile, El-Sheikh describes Boyle’s drawing and ceramic work as “monstrous, decorative and whimsical” — often all in the same image or object.

Each talk besides Chopra’s takes place in the Visual Arts Building Cinema (VA-114), located at 1396 Blvd. René-Lévesque, at 6 p.m. on the date indicated.

Learn more about the Conversations in Contemporary Art Series.