Can habitat protection save our disappearing bats?

North America’s populations are declining at an unprecedented rate, but research from Concordia and the University of Tennessee may have found a solution
|
By Cléa Desjardins 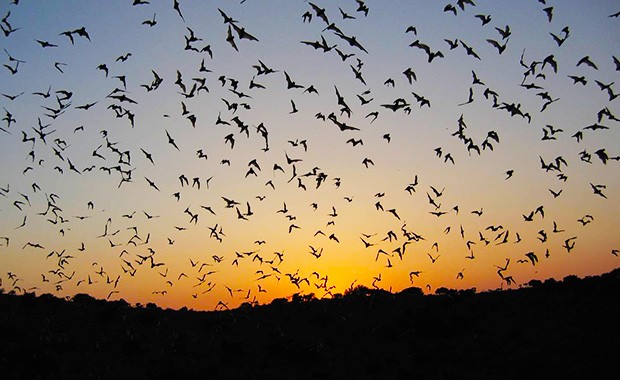 In summertime, bats are a common feature in the night sky, swooping around backyards to gobble up mosquitos. Bats also help with crops: they act as a natural pesticide by feeding on harmful insects.

But these winged mammals are now under threat. As agricultural intensification expands across the world, the conversion of their natural habitats has caused a dramatic decline in population. North American bats are also plagued with white-nose syndrome, an emerging infectious disease that’s decimating their numbers.

“Many bat populations in Quebec have lost 80 to 100 per cent in recent years,” says Concordia biology professor Jean-Philippe Lessard.

With this in mind, researchers from Concordia and the University of Tennessee studied the importance of different types of habitats for insectivorous bats living in and around agricultural regions.

In a paper recently published in the journal Biological Conservation, a team including Lessard and led by graduate student Noa Davidai showed that protecting natural habitats in systems that are highly modified by humans could help struggling bat populations.

“Our key result indicates that within an intensive agricultural landscape, the proportion of natural habitat is very important for the bats,” says Davidai, who conducted the study while pursuing graduate research at the University of Tennessee. “More natural habitat means increased bat activity, and possibly healthier populations.”

The researchers analyzed 9,552 hours of recordings of bat calls captured over 243 nights, from 15 separate monitoring sites in an intensively farmed region of south-central Texas. They used bat detectors and insect pheromone traps to monitor nightly bat activity, as well as the abundance of the corn earworm moth — a tasty treat for bats and also one of the world’s most destructive crop pests.

While heavily farmed areas do provide bats with an enormous supply of moths to prey on, the supply varies greatly throughout the growing season. When crops are not flowering and ripening, they no longer provide a sufficient insect source: natural habitats become crucial for maintaining the bat populations.

These findings have economic as well as ecological implications. It’s estimated that the pest-control provided by the bats is worth well over $741,000 per year in Texas alone. And by reducing the use of pesticides in the environment, this ultimately delays the need for new pesticides.

Lessard, one of the study’s co-authors, notes that these results resonate for bat populations across North America. The 80 to 100 per cent declines seen in Quebec are, he says, due in large part to white-nose syndrome, but “the destruction of their habitats is another major problem.”

He adds that this is something we can all help prevent. “One thing we can do is to make sure to preserve the habitats bats need to survive. This means preserving natural patches of habitat in areas where much of the natural forest has been cut for agricultural purposes, such as in the region of Montérégie, near Montreal.”

Lessard also encourages residents to help protect bats by participating in batwatch.ca, an online initiative developed by the Government of Quebec, the Quebec Centre for Biodiversity Science and researchers at several universities.

“We’re asking the citizens across Quebec and Ontario to help us locate bat colonies they might encounter in nature or around their homes,” says Lessard. “This information is crucial, as it allows us to evaluate the status of bat populations and develop a plan of action for conservation.”

Find out more about biology research at Concordia.