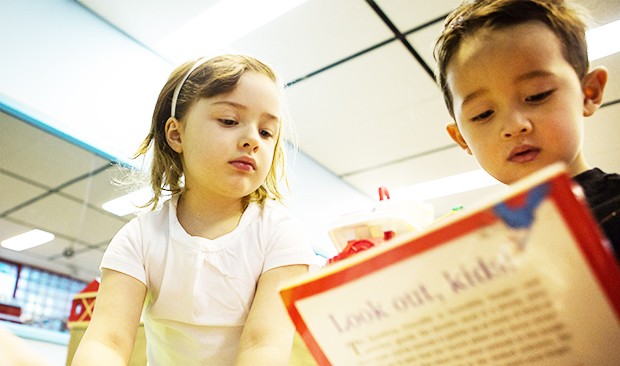 Most young children are essentialists: They believe that human and animal characteristics are innate. That kind of reasoning can lead them to think that traits like native language and clothing preference are intrinsic rather than acquired.

But a new study from Concordia suggests that certain bilingual kids are more likely to understand that it’s what one learns, rather than what one is born with, that makes up a person’s psychological attributes.

The study, forthcoming in Developmental Science, suggests that bilingualism in the preschool years can alter children's beliefs about the world around them. Contrary to their unilingual peers, many kids who have been exposed to a second language after age three believe that an individual’s traits arise from experience.

For the study, psychology professor Krista Byers-Heinlein and her co-author, Concordia undergrad Bianca Garcia, tested a total of 48 monolingual, simultaneous bilingual (learned two languages at once) and sequential bilingual (learned one language and then another) five- and six-year-olds.

The kids were told stories about babies born to English parents but adopted by Italians, and about ducks raised by dogs. They were then asked if those children would speak English or Italian when they grew up, and whether the babies born to duck parents would quack or bark. The kids were also quizzed on whether the baby born to duck parents would be feathered or furred.

“We predicted that sequential bilinguals’ own experience of learning language would help them understand that human language is actually learned, but that all children would expect other traits such as animal vocalizations and physical characteristics to be innate,” says Byers-Heinlein.

She was surprised by the results. Sequential bilinguals did, in fact, show reduced essentialist beliefs about language — they knew that a baby raised by Italians would speak Italian. But they were also significantly more likely to believe that an animal’s physical traits and vocalizations are learned through experience — that a duck raised by dogs would bark and run rather than quack and fly.

“Children’s systematic errors are really interesting to psychologists, because they help us understand the process of development. Our results provide a striking demonstration that everyday experience in one domain — language learning — can alter children’s beliefs about a wide range of domains, reducing children’s essentialist biases.”

The study has important social implications because adults who hold stronger essentialist beliefs are more likely to endorse stereotypes and prejudiced attitudes.

“Our finding that bilingualism reduces essentialist beliefs raises the possibility that early second language education could be used to promote the acceptance of human social and physical diversity,” says Byers-Heinlein.

Read more about Krista Byers-Heinlein’s research on children and bilingualism.