Fast, furious and … energy-efficient: the Concordia Society of Automotive Engineers 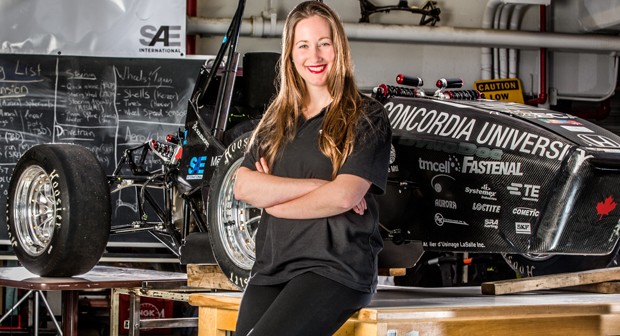 “SAE is attracting more students, giving them a chance to pick up a wrench and apply what they’ve been learning.” — Andréa Cartile, Concordia SAE president. | Photo by Concordia University

Winners know they can’t afford to rest on their laurels. So, after an impressive year of success, the Concordia Society of Automotive Engineers (SAE) is already back to work, building on the foundation of existing designs and documentation with exciting new ideas.

“There’s continuity, taking what works from the previous design and focusing on improving the rest,” said Andréa Cartile, the society’s president.

Concordia SAE is a chapter of SAE International, which challenges students to design, manufacture, test and compete vehicles. SAE’s four teams have their eyes on the prize in four different areas: AeroDesign in the air, Formula Racing on the track, Baja in extreme environments and Supermileage at the frontier of energy efficiency.

This year’s big breakthrough for the Concordia Supermileage team happened in April during the Society of Automotive Engineers World Congress and Exhibition in Detroit, Michigan, where they placed first in the Student Exhibit Competition.

“We were evaluated on vehicle design, team management and presentation quality, among other things. The judges were from Chrysler, GM, Ford, NASCAR and others. This was the first time Concordia University participated at this event,” says Patrick Leclerc, mechanical engineering student and Supermileage coordinator.

At the SAE International Supermileage competition in Marshall, Michigan in June, the team finished 10th place overall with a fuel economy of 448 miles per gallon, its best result in over 15 years. It also won the Endurance Trophy for the most durable and reliable vehicle — so durable and reliable that the vehicle’s many track runs required the creation of an extra column on the results table.

In August, Supermileage sponsor NOK-Freudenberg invited the team to the Center for Automotive Research (CAR) Management Briefing Seminars in Ann Arbor, Michigan, where the Concordia team was featured in Autoline.tv.

Concordia’s Formula Racing team attended the Formula SAE competition in Brooklyn, Michigan in May, ranking 15th in the design component. The top teams included Munich, Stuttgart and fellow Montrealer L’Ècole de technologie supérieure (ÉTS). Much of last year’s team is back and working on the 2014-2015 vehicle. “We’re taking a very serious engineering approach, where everything is validated, and changes are made only where it is clearly demonstrated why. That, along with the actual performance of their vehicles, is the notable feature of teams that win these competitions,” says Cartile, also a Formula team member.

The AeroDesign team is gaining new members and enjoying forward momentum. In March at the 2014 SAE Aero Design West competition in Fort Worth, Texas, a respectable 14th-place finish was achieved by explaining in great detail the reasons for and implications of a fatal electrical failure. However, the team was encouraged by reaction to their oral presentation, which received a 4th place win in that category. This year, a new test plane is being developed, and the target is a top-five ranking at the next competition.

For the Baja team, whose vehicle performance and durability are tested in an extreme environment, the results of the team’s new data acquisition system, backed up by extensive validation and testing, are leading to substantial incremental vehicle improvements. This has raised the team’s hopes of making the top 20 at the 2015 SAE Baja competition and the top 10 at the 2015 Épreuve du Nord in Quebec City.

One of the oldest student associations at Concordia, “SAE is attracting more students, giving them a chance to pick up a wrench and apply what they’ve been learning, and to work with others in teams on real-world engineering challenges,” says Cartile.

The SAE competitions draw more than 4,500 students from 500 universities around the world every year and provide students with the opportunity to fully experience engineering theory as applied to real applications.

“This kind of hands-on experience in aerospace and vehicular engineering does not come through courses alone,” says Cartile. “People find this motivates them tremendously to learn, as they apply it to real-world engineering problems, cooperating intensely as a team and competing keenly with the world.”