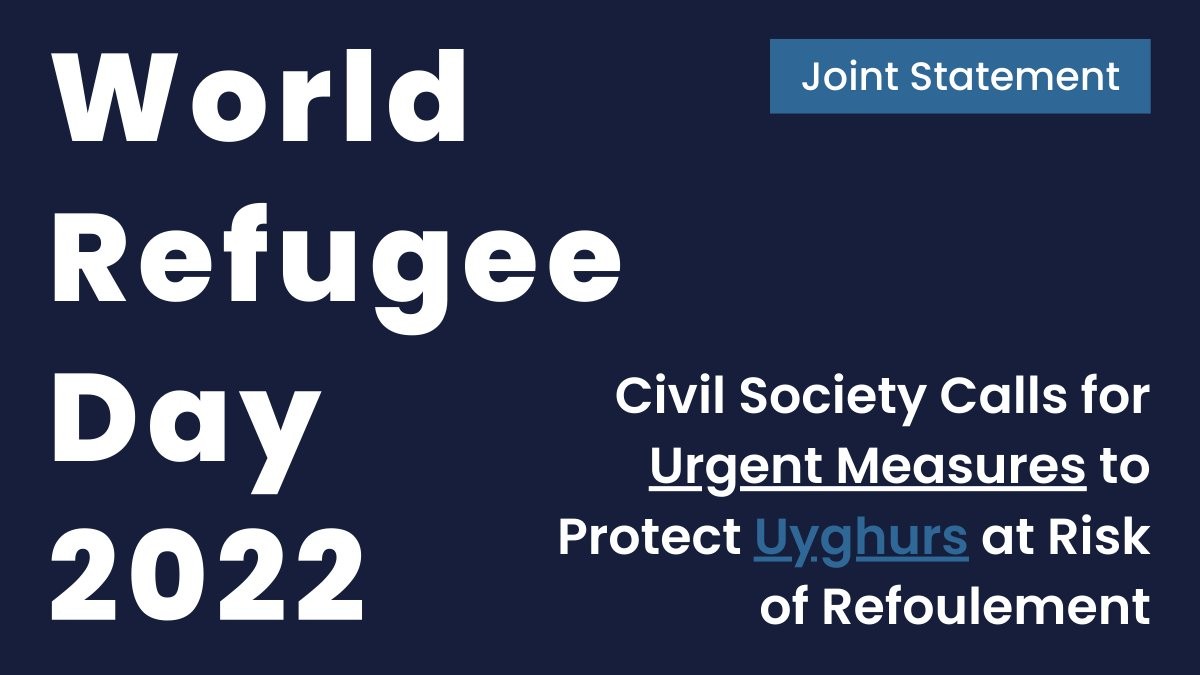 On World Refugee Day 2022, a group of 22 refugee and human rights groups and 50 Uyghur organizations are calling on governments and international organizations to take urgent steps to protect Uyghurs and other Turkic peoples at imminent risk of refoulement. As atrocity crimes unfold in the Uyghur region of China—including mass detention, forced labour, and torture—Uyghurs outside China, including human rights defenders, are subject to persistent barriers to international protection and risks of deportation.

Uyghurs have increasingly been recognized as experiencing persecution as a particular group in their region of origin, yet little is known about transnational repression they face in the diaspora. Uyghurs who are not firmly settled in third countries are facing an exceptional risk of detention and refoulement. Many have faced harassment and intimidation by local authorities, often at the request of Chinese authorities, and in some cases have been subjected to prolonged detention.

While access to international protection mechanisms like the UNHCR remains limited, transnational repression acts as deterrence to human rights activism and a practical threat to the exercise of individual rights, including the right to be protected from torture, and inhumane and degrading treatment.

In order to provide adequate protection to Uyghurs and other Turkic peoples at risk, immediate steps should be taken. Importantly, access to protection should not be impeded by a lack of documentation. Our organizations call on:

For over two decades, Uyghurs living outside China have faced efforts by Chinese authorities to pressure foreign governments to detain and forcibly transfer them back to China. Research shows that more than 1,500 Uyghurs, including many who are human rights defenders, have been detained or forcibly returned to China where many have faced imprisonment and torture in custody.

Since 2016, the Chinese government has intensified repression and carried out a policy of mass, arbitrary detention of Uyghurs and other Turkic peoples, subjecting them to severe policies including the prohibition of most religious, linguistic, and cultural practices; state-sponsored forced labour; imprisonment; and forced sterilization and birth prevention policies.

Uyghurs are targeted on the basis of ethnic origin and religious affiliation, but detention and imprisonment have also been based, in many cases, on connections outside China. Uyghurs who have worked or studied abroad—and even those who have communicated with family or friends abroad—have been targeted for detention and imprisonment. It is well-established that all Uyghurs and Turkic peoples forcibly returned to China would be at serious risk of persecution.

The principle of non-refoulement, binding to all states regardless of ratification of the Refugee Convention, firmly establishes that no one should be returned to a country where there is a real risk of persecution, torture, inhuman or degrading treatment or any other human rights violation.

On World Refugee Day, we recall that the 1951 Refugee Convention, signed by 149 States to date, was drafted in response to the forced displacement and deportations that took place during the Second World War. The international community must live up to these principles and make good on its duty to protect Uyghurs at risk of facing mass atrocities in their homeland. No return is safe for Uyghurs. Immediate steps are urgently needed to ensure their protection.