Pete Regimbald, BA 73, bids farewell to the Concordia football program at the end of the 2018 season — help us give him the send-off he deserves.

After 50 years of loyal service to the football program, along with the countless unforgettable memories shared with staff and athletes over the years, let us honour the coach that has contributed to Concordia's athletics legacy.

$40 - per person, food and refreshments will be served 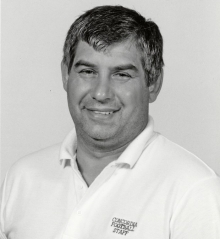 Coach Reg, as he's known around campus, began his coaching career with the Loyola Warriors in 1968 as assistant coach to the legendary George Dixon. Since then he has held several coaching titles but is best known as a leading authority on special teams play. His expertise and contributions are credited with helping Concordia to its 1998 record-sitting campaign.

Come out to the Alumni Zone and the Stingers Football Game to support Coach Pete Regimbald as he coaches his last Homecoming Football game. Before the kick-off he'll handout prizes for the best #StingersUnited team spirit in the Alumni Zone.

We hope to see you there!