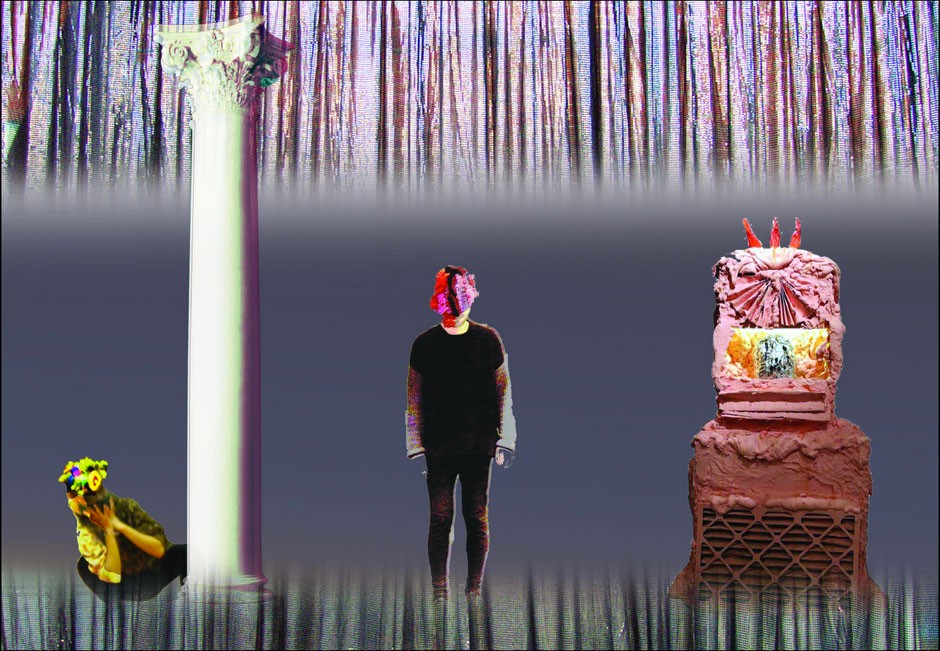 With Visitations, an in-process and performance exhibition, Curator AN Soubiran brings three artist-researchers and their processes to the three FOFA Gallery spaces.

The exhibition presents Matthew-Robin Nye, Jacinthe Loranger, and Laura Acosta, and intends to unveil a cumulative process-based collaboration. Over the course of a six-week in-gallery residency accessible to the public, a series of interventions and creative methodologies will attempt to alter the Gallery space. The project will feature time-based media, scheduled and spontaneous interventions, collaborative workshops, and lectures from local and international artists and thinkers.

Visitations explores real versus virtual ways of representing a series of visitations between the artists and participants. All three artists will engage in a conversation about architecture, landscaping and storytelling by means of their own practices, actions and political interventions. These artists will come together to examine notions of 'place' to ultimately determine what constitutes a place and what sort of spaces can emerge.

Visitations will present series of interventions and creative methodologies in an attempt to alter the Gallery space. The project will feature time-based media, scheduled and spontaneous interventions, collaborative workshops, and lectures from local and international artists and thinkers.

Click each panel for more information regarding the projects, artists and collaborators. Due to the process-based and performative nature of the exhibition, the dates and specifics are susceptible to spontaneous alteration. Visit our facebook page for live updates!

DUCK FEET is a love song to blackness, otherness, queerness, and its equally love-induced fractalization of neurotypicality and whiteness as system. This project is a circus in the making; fusing live recording, performance, and bodily contortion, the collboartors seek to involve the audience as co-composers as well as agents of singularity.

An interactive, improvisational event will take place on July 23rd from 5 to 7 p.m. in the FOFA Courtyard- a culmination of sound art, contortion and new media.

How might capitalist futurity become so immaterial that the affective texture of our experience becomes operational at a planetary scale? Today, radical shifts appear in our affective relations with the city, somewhere between self and body, the World and the Earth. KETL is a speculative think-tank for imagineering affective capitalism as a convergent end-game scenario for planetary urbanism. Part art work, sci-fi premise and ideas incubator, the project cuts across two kettles - from the police application of military kettling tactics, to moments where crisis offers pause to have a cup of tea together.

A series of movement research explorations and media performance interventions in the local area recombine their traces for co-composition in the FOFA Gallery courtyard on July 23; culminating in a collaborative event with DUCK FEET.

Jacinthe and Alexis will collaborate on a project fusing sound media and printmaking, attempting to build a low-frequency speaker pyramid structure. The interdisciplinary art practice of Alexis explores allegories of the human voice via vocal & electronic improvisation, sound installation and performance.

Rima's playful actions are used to tell the untellable story of Iris Breeze in which vacations are testimonies that too much relaxation or too much stimulation can invite disaster. A piece that rightfully demonstrates that a walk on a beach, a walk through the park, and a walk to the bathroom all hold equal privilege in the mind of the bored.

Leyla and Émilie's collaborations survey many themes, primarely focusing on corrupting radioelctric waves. With this specific "visitation," the artists will propose a multidisciplinary portrait of a fallen technological kingdom, ruins and rubble reggressing to the state of noise. Using Émilie's own designed apparatus, the sound waves will randomly punctuate and score Leyla's images in motion, all activating the surface of an erected pillar of concrete blocks.

Michelle explores nominations of the body as the form and main actor: to be folded, reframed, reiterated, documented and remediate. A gesture and a rupture for the sake of human-ness. A mean of becoming and understanding form through the manipulation, disruption and collapse of a continuous surface.

Joëlle and Jean-François' performance proposes an overwhelming array of mediums, in which the climax is a greek statue's ascension over a retro-futuristic backdrop.

Using debris, junk and obselete everyday relics, Jean-François probes what is odd and grotesque.  His performances, video images and drawn figures juxtapose and recontextualize fragments borrowed from local culture. Dissociative disorder, semiological chaos, allegory of the banal and extravagance are cues of investigation that inform his performances, videos, photos, drawings and installations.

Vincent will perform three acts composed of dialogues and sonic gestures that use a context in order to reposition people in front of things. The first, An interview of Pourquoi (my fish): The curse of "parceque," a fictional dialogue between a man and a structural entity personified in a fish named "pourquoi," ultimately questioning the dialectic of thinking in threes; the second, Instruction, Copy and Occultism will give a voice to Marcel Duchamp and Jean Paul Sartre; and the final act, El handicapo: transandar la langua, a vocal adaptation of a performance called "reinactment" (in spanish).

Alice will explore the question of light as a diffractive and time based material, asking: how can light and color interfere and collaborate with other ongoing pieces, materialities and human actions within the gallery setting? She will create small kinetic interventions out of glass, crystals, motors and dichroic glasses to determine what kind of spatial and materials relations can emerge within the space.

Artist lecture / performance: Hannah Heilmann (DK) talks about her collaborative art-making and its strong tendency to fail
August 12 at 1pm in the York Corridor Vitrines

Hannah Heilmann’s interdisciplinary visual art, performance and curatorial practice explores human subjectivity, its abbreviations and prolongations in contemporary culture and technology. Characterized by a murky pallet and otherworldly texture, Heilmann’s work presents an endearing counterpoint to a sterile future. Working both independently and in collaborations, Heilmann has also exhibited under collective pseudonyms of Ingen Frygt and Party And Lost, the radio station GeneralBootyofWork.net, as well as the artist run exhibition space TOVES in Copenhagen. Hannah has exhibited and performed her work at the Danish National Gallery and the Verbo performance festival, Sao Paulo. Heilmann currently holds a six month fellowship as the Danish artist-in-residence at the Independent Studio and Curatorial Program (ISCP) in New York. Hannah is an Associate Professor at the Royal Danish Art Academy in Copenhagen.

Joanne and Vicky collected video imagery during a few trips in the countryside as well as in their everyday life in the city. By transposing this material into an installation and video performance using video projectors, sound, the body and various materials to distort the moving image, they explore what results from the layering of the natural and manufactured. The abstract and rhythmic video collage stemming from the recomposition of our figurative videos strives towards maximum sensory effect while exercising an economy of means.

Joanne Martel and Vicky Moe will present the outcome of their research on Friday August 14 from 3pm to 5pm in scheduled performances occuring every 30 minutes.

Matthew‐Robin Nye is an interdisciplinary artist whose research and production explores and maps architecture's political potential and aesthetic dimensions, articulated through social and visual art practices. His current work looks to define and produce Queer Utopic Architectural Space through collaboration, performance, video work, and installation. Formerly a member of the Flux Factory collective in New York City, Nye has exhibited, lectured and held residencies throughout Canada, the United States, South America, and Europe. Nye is presently a participant in the SenseLab and an MFA candidate at Concordia University in Montreal.

Laura Acosta is a Colombo-Canadian interdisciplinary artist, with an interest on textile constructions and collaborative efforts. She utilizes interventionist tactics to dislocate the everyday through different assemblages of costumes, sounds, movement, color and the telling of absurd narratives. Her work questions the limits of the political fictions in public spaces, by generating autonomous situations of play. Its visual outcome borrows the language and history of performance art to either excuse or explain itself. The work blurs the boundaries between performance, image-based installation, and experimental theatre.

Schedule for Artists' Collaborations and Interventions /