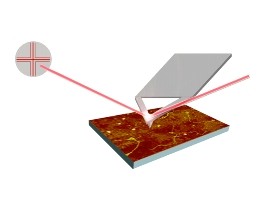 In collaboration with Prof. Peter Davies (Queen's University) we have also begun to investigate the protein dimerization domain of calpains, calcium-dependent cycteine proteases involved in calcium signaling. In particular we are interested in using single molecule force spectroscopy to investigate the role of calcium in the dimerization of the PEF (penta-EF-hand) domains.