Lieutenant-General the Honourable Roméo A. Dallaire 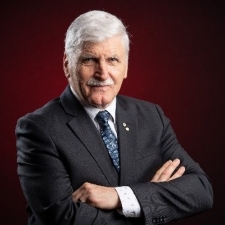 Lieutenant-General Roméo Dallaire is recognized as an advocate of peacemaking, peacekeeping, and peacebuilding in the world’s most war-torn regions.

For the public at large, nationally and internationally, it is following General Dallaire's nomination as Commander of the United Nations Observer Mission- Uganda and Rwanda (UNOMUR) and the United Nations Assistance Mission for Rwanda (UNAMIR) on 1 July 1993 that the name Dallaire became synonymous with COURAGE. Courage in the field, Courage in challenging military and political decision makers at home, abroad and in the United Nations. Courage in telling the story, Courage in fighting the demons which haunted him following these most difficult times and finally Courage in putting the pieces of his life back together and becoming a beacon of hope for others. He is a humanitarian acclaimed in Canada and world-wide, an author, a soldier, and a special advisor to various government agencies.

On his return to Canada, he assumed simultaneous appointments as Deputy Commander of Land Force Command and Commander of the 1st Canadian Division. In 1998, he was promoted to the rank of Lieutenant-General and appointed Assistant Deputy Minister (Human Resources-Military), followed by an appointment as Special Advisor to the Chief of the Defence Staff for Officer Professional Development.

General Dallaire is an Officer of the Order of Canada, a Grand Officer of the National Order of Québec and has been awarded the United States Legion of Merit. He is also the first recipient of the Aegis Award on Genocide Prevention and the United Nations Association of Canada’s Pearson Peace Medal. His published account of the 1994 Rwandan genocide, Shake Hands with the Devil – The Failure of Humanity in Rwanda, has earned international recognition as well as the 2004 Governor General’s Literary Award for Non-Fiction and the “Shaughnessy Cohen Prize” for political writing awarded by the Writers' Trust of Canada.

While a Fellow of the Carr Centre for Human Rights Policy, the John F. Kennedy School of Government, Harvard University he conducted research in the areas of conflict resolution and the elimination of the use of child soldiers. It was while at the Carr Centre that General Dallaire was summoned to the Senate on March 24th, 2005. Senator Dallaire continues to write and speak out against human rights abuses, genocide and ethnic cleansing. He continues to focus on human rights and the plight of war affected children in articles and lectures in Canada, Europe, the UK, the US, and South Africa.

General Dallaire served on the Prime Minister of Canada’s Special Advisory Team to the Darfur Task. In September 2006, he was named Senior Fellow of the Montreal Institute for Genocide and Human Rights Studies, in which role he very actively participates in fulfilling MIGS' missions.