380 films, master classes and round tables for cinema lovers

Following its successful hosting of the largest-to-date edition of the Fantasia Film Festival this past summer, Concordia is getting set to host the 43rd edition of the Festival du nouveau cinéma (FNC), which begins October 8.

The recent renovations to the university’s Alumni Auditorium (H-110) and J.A. DeSève Cinema attracted the attention of FNC, one of Montreal’s largest film festivals, and Katie Gilkes, manager of Concordia’s cinemas, says it heralds the beginning of an exciting new time for film at Concordia.

“Now that we’ve actually upgraded both cinemas to industry standards in terms of our projection equipment, we’re really quite attractive to festivals,” she says. “You don’t really get a 700-seat venue and a 160-seat venue across the street from each other anywhere else in Montreal that can play digital cinema packages, which is the industry standard for films now.”

The festival will screen several of its major films in the Alumni Auditorium, including Tokyo Tribe, the opening film of the Temps Ø series, on Thursday, October 9. Julien Fonfrède, programmer for Temps Ø, calls the ambitious rap musical from Japanese director Sion Sono daring and brilliant.

Tokyo Tribe, the new musical by Japanese director Sion Sono, will kick off the Temps Ø program. | Photo courtesy of FNC

“It’s one of those very smart films that’s idiotic at the same time,” he says. “It really pleases audiences and young critics.”

For Temps Ø, Fonfrède says he always tries to find films like Tokyo Tribe that take chances, and that don’t necessarily adhere to standard genres. But the Festival du nouveau cinéma also screens more typical film fare, as well as shorts and documentaries.

This year’s program has a strong emphasis on films from Quebec and Canada, including Wild, the new film by Quebecois director Jean-Marc Vallée, playing on Saturday, October 18 in Concordia’s Memorial Auditorium.

Immediately after Wild, the newly renovated venue in the Hall Building will also host the festival’s closing film, The Salt of the Earth, a documentary by Wim Wenders. The film profiles renowned Brazilian photographer Sebastião Salgado.

The smaller DeSève Cinema, located in the J.W. McConnell Library Building (LB) will host a number of special screenings throughout the festival, including the 14 short films selected for the first edition of the Rencontre pancanadiennes du cinéma étudiant. Included on the list is Les Enfants Sauvages, a Concordia production directed by student Renaud Lessard. 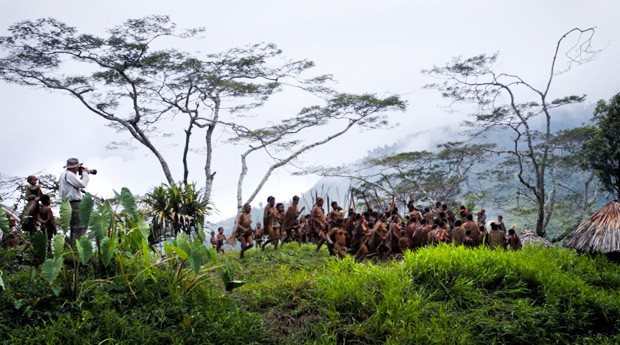 FNC will screen its closing film, The Salt of the Earth, a documentary on Brazilian photographer Sebastião Salgado by Wim Wenders, in Concordia's Alumni Auditorium (H-110) on October 18. | Photo courtesy of Unifrance Films

Rosanna Maule, an associate professor of Film Studies, says Concordia’s Mel Hoppenheim School of Cinema has a strong connection with the festival that benefits students in many ways, beyond participation in the film competition and discounted tickets.

Among the school’s plans for this year’s edition of FNC is a festival blog that will feature articles, daily reports and interviews with filmmakers. As well, some students have signed up as volunteers or interns for the festival.

“There are many, many students in the program who are interested in festivals. It’s becoming a big area of study,” Maule says, before adding that attending or taking part in the festival is also a great opportunity for students to meet and learn from major players in the industry.

“We’re trying to further develop the visibility of the festival on campus, and convince students to attend some of the screenings,” Maule says, before adding that there’s also a lot more on offer during FNC than just films. “There are also roundtables, master classes, installations, and cinema created within the framework of new media.”

Screenings accompanied by live commentary from the filmmaker have proven very popular with festivalgoers in the past. Micheline Lanctôt, a part-time professor at Concordia and a celebrated Quebec filmmaker, will offer commentary during a screening of her film Pour l’amour de dieu in the DeSève Cinema on Saturday, October 18.

The festival will screen an estimated 400 different films this year. Fonfrède says he and the FNC’s other organizers like to pack as many films and events into the festival as possible, so attendees have plenty to choose from.

“We like to have all sorts of these things happening at the same time,” he says, adding that since the festival’s reputation is growing, the programmers have more and more good submissions from which to choose.

“If the films are good, or they’re big films, then how can we say no!”