On vinyl: Archival recordings at 33 RPM 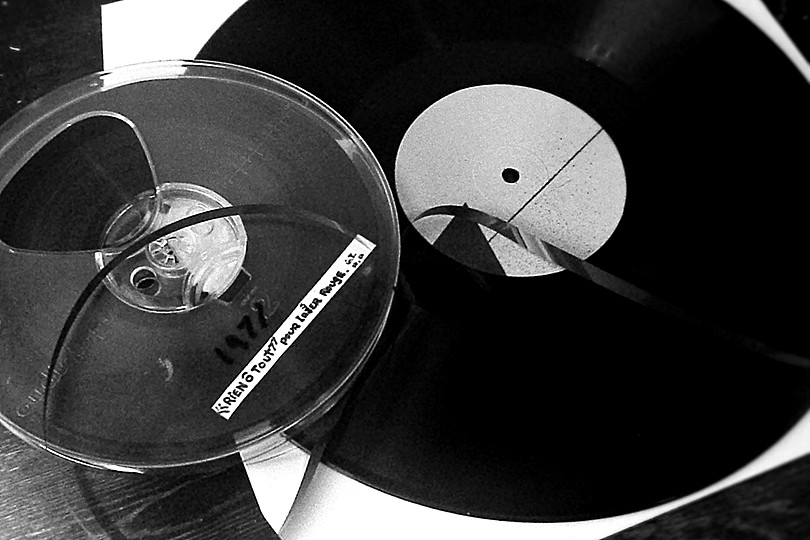 From one analogue format to another. | Photo: Eric Fillion

I often joke that I graduated from vinyl record bins to private and institutional archives when I made the decision to undertake doctoral research in history. I suppose that there is some truth to this.

I remember vividly being a teenager and finding a long out-of-print copy of Genetic Control’s First Impressions, a 1984 7-inch record that many collectors now consider the holy grail of Montreal hardcore. Needless to say, I was overjoyed.

I experienced similar elation a couple of years ago while doing research overseas. Buried deep in the archives of Brazil’s Ministry of Foreign Affairs was an extraordinary 1953 report that I had been looking for. It offered answers to many of the questions that inspired my doctoral research on music and diplomacy in Canadian-Brazilian relations.

More importantly perhaps, this research trip provided a convenient excuse to visit some of Rio de Janeiro’s and São Paulo’s record stores on my quest to find rare compilation albums that featured the singers — Donald Lautrec and Paul Anka, among others — who represented Canada at the Festival Internacional da Canção Popular in the 1960s.

If you suffer from melomania, you probably attended Record Store Day last Saturday. The annual event, with its avalanche of gimmicky limited-edition releases, may suggest that the appeal of the vinyl record is rarity, but there is more to the format than this. After all, Record Store Day is aimed first and foremost at celebrating the “unique culture” and “special role” that independently owned record stores play in their communities.

As a matter of fact, community is what turned me into an inquisitive record collector and an instinctive sound archivist.

From decline to resurgence

The history of the vinyl record is a tumultuous one. It begins with Thomas Edison’s 1877 invention of the phonograph, a device that made it possible to record and playback sound using cylinder records. Emile Berliner’s gramophone, which could play lateral-cut flat discs, paved the way for the commercialization of the technology a decade later.

Record companies initially made sound discs using a shellac compound, but wartime shortages in the 1940s forced them to adopt a promising alternative: vinyl. In addition to material, the “format wars” that opposed labels in the first half of the 20th-century revolved around issues of size (7-inch, 10-inch or 12-inch discs) and rotational speed (78, 45 or 33 RPM).

Travis Elborough’s The Vinyl Countdown, Richard Osborne’s Vinyl and Annegret Fauser’s Sounds of War do an excellent job at retelling that early history.

The vinyl record faced numerous rivals from the 1960s onward: the 8-track cartridge, the cassette tape and the compact disc. Following market peaks in the early 1980s, sales declined abruptly, which led many to predict that the format would disappear before the end of the millennium.

It did not. Nielsen Music’s year-end report for 2017 shows that vinyl “posted its seventh consecutive year of sales growth, with a 22 per cent increase to 804,000 units,” in Canada.

Music aficionados, many of them millennials, are buying records because of a need for an aesthetic and sonic object that they can hold in their hands. They also seek the ritualistic experience of hunting for and discovering both old and new sounds on a format that is not easily disposable.

That said, underground and alternative music scenes never abandoned the format. Indeed, record trading, record collecting and record producing have been integral to the experience of listening to, supporting and making music for those in the margins of mainstream culture throughout the 1990s and 2000s.

It is not a coincidence that Montreal, a city with a wealth of diverse and thriving music scenes, has so many independently owned record stores. Although I have not done the math, I suspect that Montreal has more stores per capita than any other North American city.

Starting in my teenage years, I spent countless weekends doing the rounds of stores to augment my collection and solicit the recommendations of “learned” melomaniacs: owners, employees and fellow customers, some of whom became good friends, even bandmates.

Record stores provided a venue for engaging and meaningful conversations in addition to acting as pillars of the city’s music scenes through their wholehearted promotion of local concerts and releases. Giving back was their motto irrespective of the money one spent — or did not spend — there.

Some of those stores are long gone: Dutchy’s and Primitive. Others such as Cheap Thrills and l’Oblique are deservedly still around. Nowadays, you can also stop at Soundcentral, Aux 33 tours, Phonopolis, La Rama, Death of Vinyl, Sonik, Atom Heart and Beatnick to name but a few.

I am convinced that there is an oral history project there for someone with an interest in music scene ecosystems.

In light of the above, it should not come as a surprise that I decided to release music exclusively on vinyl records when I founded Tenzier, in 2010, to preserve and disseminate archival recordings by Quebec avant-garde artists.

Of course, a mild dose of nostalgia informed my decision although practical reasons also came into play, namely the fact that the vinyl record is a durable format if stored and handled with care.

I also felt that it was a more appropriate medium with which to convey the historic and symbolic importance of the analogue recordings I had unearthed: among others, the disorienting soundtracks of Étienne O’Leary (TNZR050), the unrelenting free jazz of Quatuor de jazz libre du Québec (TNZR051) and Gisèle Ricard’s meditative electroacoustic works (TNZR053).

No doubt, these recordings of experimental music would have been released on vinyl if viable dissemination channels had existed in Quebec in the 1960s, 1970s and early 1980s.

Above all, the format offered opportunities to foster inter-generational dialogue and solidarities in that Tenzier’s eye-catching album covers promoted — and continue to promote — the meeting of a contemporary visual artist with a composer from the era under consideration: for instance, Félix Morel with Bernard Gagnon (TNZR052) and Maxime Jenniss with Guy Thouin (TNZR056).

Complementing these efforts are one-off performances, which put different generations of artists in relation with one another. The Jean-Pierre Boyer retrospective, organized at Cinémathèque québécoise in 2014, and the upcoming Jazz libre du Québec event, scheduled to take place during this year’s Suoni Per Il Popolo Festival, are pertinent examples.

The music that Tenzier releases is difficult to listen to. I am willing to admit that much. That is why it is best experienced through the deep listening that accompanies the ritual of placing a stylus in the grooves of a record and letting it make its way from the outer edge to the centre without interruption.

Ultimately, this project of a non-profit archival record label is about proposing alternate readings of Quebec’s musical pasts as much as it is about community and the need to nurture connections.

This cultural project developed, acquired its meaning and found its momentum through collaborative efforts and passionate conversations, many of which began — and continue to take place — in the independently owned record stores that form part of the backbone of Montreal’s music scenes.

Tenzier is rooted in place and time. It is about soundscapes and the people that give them shape, colour and resonance. It all plays itself out, invariably, at 33 RPM.