Lace up: Read, run and write 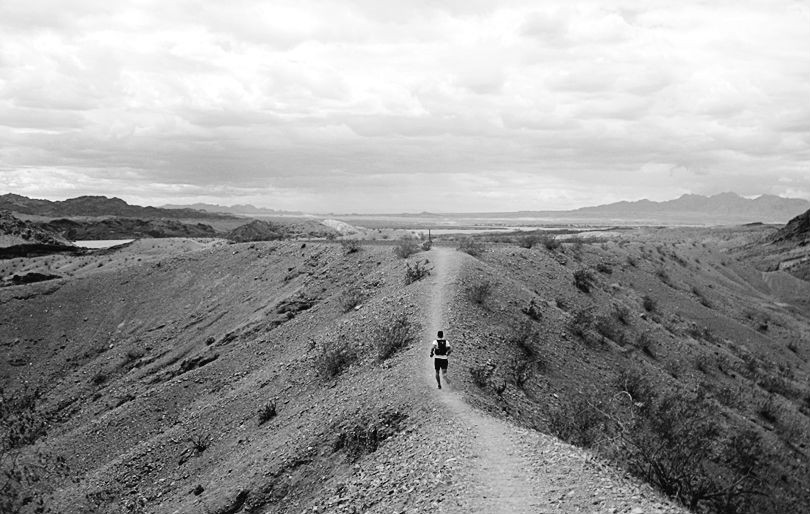 Taking a break from my dissertation in Sara Park, Arizona. | Photo: Valérie Dumaine

48,493 words and 1,951 kilometres. The first number refers to the progress I have made on my doctoral dissertation while the latter corresponds to the distance I have run since the beginning of the year. Some have said that doing a PhD is like running a marathon. Is it?

To be frank, I would not know since I never signed up for a marathon. I never joined the millions of runners who meet up once a year — sometimes more — at starting lines in Quebec, throughout Canada, or elsewhere in the world, to cover the official distance of 42,195 kilometres, propelled by the much-deserved cheers of enthusiastic crowds.

Still, I have run marathon-like distances and always returned changed whether I did so solo or with the support and encouragement of my partner in life. What brings doctoral studies and long-distance running together is neither the carefully plotted course nor the finish line; it is the journey of endurance and self-rediscovery that they both make possible. Marathon or not, it is about going the distance and being in the moment every step of the way.

People run marathons or similarly strenuous distances for a plethora of reasons. One of these is health. Running strengthens our heart and lungs while helping make our bones, joints and muscles more resilient. It can positively impact blood pressure levels, heart rates and sleep-wake cycles in addition to creating conditions for better mental health — from reducing stress to combating depression and protecting the brain from aging.

People also run to inspire hope and create change. National hero Terry Fox epitomized this ethic of running in 1980 when he ran more than 5,000 kilometres in support of cancer research. Nowadays, professional and amateur athletes leverage the visibility afforded by large-scale events to raise awareness about socio-political and environmental issues. For example, the list of Rock ‘n’ Roll Charity Partners for this weekend’s Montreal Marathon includes: World Wildlife Fund, Organization for Autism Research, World Animal Protection, Parkinson’s Foundation and Bright Pink to name but a few.

While some are tempted to spend as much time as possible on the course to maximize exposure for their cause, competitive runners race to the finish line to outperform themselves and/or their fellow marathoners — be they family or friends, colleagues or total strangers. Disciplined, many of them seek lessons of tenacity and focus that they can apply in their professional life. While in Brazil, I picked up a book titled Vidas Corridas by Sérgio Xavier Filho. Through nine mini-biographies of high-achieving men and women, the author argues convincingly that long-distance running and entrepreneurism are not only compatible; they also are mutually reinforcing activities.

However, the connection between marathons and performance-based capitalism should not obscure the fact that running is a social activity for most amateur athletes. The Marathon du Médoc (it features 23 wine tasting stops) and the ET Full Moon Marathon (it takes place on Nevada’s Extraterrestrial Highway) are pertinent examples.

Running is also part of who we are as a species, according to paleoanthropologist Daniel Eric Lieberman. His research suggests that endurance running played a key role in the development of the human body form, two million years ago. It contends that the genus Homo evolved to travel long distances by scavenging for food over large territories and by hunting prey until they collapsed from exhaustion — a practice known as persistence hunting. Lieberman’s hypothesis gained popularity in recent years with the publication of the book Born to Run and the release of the documentary film Fair Chase.

As a vegan runner living in the 21st-century, this is not why I run.

My background as a drummer and percussionist might have something to do with it. Guillaume Le Blanc, in a splendid book titled Courir: Méditations physiques, makes an interesting observation regarding the interplay between music and running. He writes that runners are like drummers in that they percussively create time where there is only space. That would explain why I never venture outdoors with headphones on. The rhythm of my feet hitting the ground, my breathing patterns and the sloshing sound of my hydration vest suffice to spur me on.

I am most aware of how beneficial this activity is to me when I am outside, absorbed in the meditative act of simply accumulating kilometres. Mark Rowlands, professor of philosophy at the University of Miami and author of Running with the Pack, insists that running is “intrinsically valuable.” The argument is compelling.

I have come to approach my journey as a PhD candidate with the same philosophy. In implying that graduate research is intrinsically valuable as an intellectual pursuit, I do not mean that it does not also have instrumental value (i.e. that its value does not also lie in the knowledge transfer and career opportunities it creates or ought to create). One does not exclude the other, obviously.

The pleasure I get from doing research and writing my dissertation is not dependent on what may come after (it is probably for the best considering the “academic precarity” that awaits most of us after graduation). I am enjoying the process for what it is, including all the blood, sweat and tears I put into it. Doing a PhD requires dedication, focus, endurance and a certain level of tolerance for pain and solitude. The same applies to long-distance running. In their essence, both are character-building and life-affirming commitments.

Renowned author Haruki Murakami makes a similar point in What I Talk About When I Talk About Running: “Exerting yourself to the fullest within your individual limits: that’s the essence of running, and a metaphor for life — and for me, for writing as well.” His other lesson? “Pain is inevitable. Suffering is optional.”

My longest run this year consisted of a 50-kilometre exploration of the north and south shores of the Rivière des Prairies. This outing doubled as a pilgrimage of some sort to the eastern parts of Île Jésus (i.e. Laval) where I grew up. Running, I should add, is a great way to revisit familiar places or explore new ones. This is especially true when doing research overseas (i.e. Rio de Janeiro, Brasília and São Paulo), travelling to conferences (e.g. Calgary and Chicago) or taking a short break from dissertation-writing with a road trip across the Southwestern United States.

In the end, pace is everything. Whether your journey consists of putting one foot in front of the other or putting pen to paper (both, in my case), it is all about rhythm and keeping attuned to what is happening along the way.