Governor emeritus was an honorary degree recipient, veteran and member of the Canadian Railway Hall of Fame
|
By Howard Bokser
Source: Advancement and Alumni Relations

Born in Toronto in 1924, Lawless rose from junior clerk to president and chief executive officer of Canadian National Railway (CN) over a 50-year career. 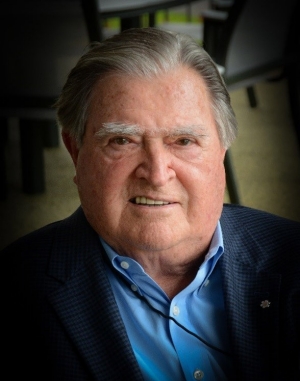 Ronald Lawless served on Concordia’s Board of Governors from 1988 to 2002.

He served on Concordia’s Board of Governors from 1988 to 2002 and was named governor emeritus in 2003, the same year he received an honorary degree from the university.

“Ron Lawless was a true Canadian success story, and we’re very saddened by his loss,” says Concordia President Alan Shepard. “Concordia was fortunate to benefit from Ron’s expertise and commitment during the 15 years he sat on our Board of Governors, which included roles on several board committees. We could not have found a stronger volunteer supporter.”

Lawless landed his first job at CN as a junior clerk in 1941. He left to serve in the Royal Canadian Air Force from 1943 to 1946. When he returned, he steadily climbed through CN’s ranks, eventually moving to its head office in Montreal.

He was named president of the rail division in 1979 and its chief operating officer in 1982. Lawless became CN’s president and CEO in 1987 and, two years later, added the same positions at Via Rail. He retired in 1992.

Lawless was named Canada’s Transportation Man of the Year in 1986 and was inducted into the Canadian Railway Hall of Fame in 2004.

He was also a founding director of the Concordia University Foundation in the mid-1990s and served as a board member for many years.

“The Concordia University Foundation and Board of Governors were fortunate to have input from Ron, who was a very astute business man,” says Bram Freedman, Concordia’s vice-president of Advancement and External Relations. “He was a great example of someone who, after a long and successful career, continued to contribute greatly to his community for many years after. I worked closely with Ron for a number of years. He was a fine man and a real gentleman.”

Lawless was also involved with the board of directors of the Old Brewery Mission in Montreal since 1989. He was its long-time chair and then chair emeritus. He was named a knight of the Order of Saint John, received an honorary degree from Bishop’s University in Sherbrooke, Que., and became a member of the Order of Canada in 2007. He was awarded the silver jubilee medal in 2013 by her majesty Queen Elizabeth.

Board of Governors alumni