A reminiscence by way of introduction

John Buell, BA 50, began teaching English in 1950 at Loyola College, one of Concordia’s founding institutions, and remained at the university until retiring in 1987. His novel The Pyx, originally published in 1959, has been reissued by Véhicule Press in its Ricochet Books Canadian noir series.

Below is an excerpt of the new introduction by Buell’s former student, Sean Kelly. 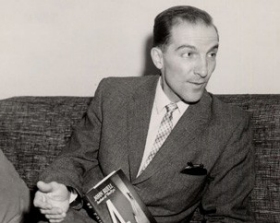 In 1959, when his novel The Pyx was published, John Buell was a 32-year old professor at Loyola College, where I was a first-year student and he saved my life.

Throughout my spotty adolescence I had written a great deal of stuff that I believed to be poetry. Professor Buell was kind enough to show some of my work to a real poet, his friend Daniel Berrigan, S.J. It was Father Berrigan’s considered opinion that I should stick to prose; thus I was spared the wretched existence and early suicide that every fake poet deserves.

Loyola had just instituted an honours English program. I took, and found stimulating, and did rather badly in, two of Professor Buell’s classes. He was a brilliant teacher, provocative, strict, amusing, sometimes funny, always intense. He always wore a grown-up tweed jacket and tie to class. Scruffy as we were, we did not think of him as a pal. 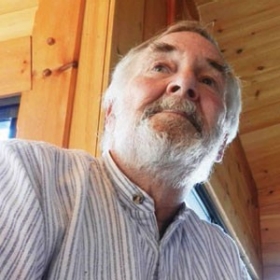 Sean Kelly was an editor of National Lampoon magazine and had a successful career as a writer. He now teaches in the humanities and media studies department of the Pratt Institute in Brooklyn, N.Y.

I saw him seriously angry only once. In his Shakespeare seminar, he and seven students sat around a table, all of us smoking furiously. When I realized, to my dismay, that I was out of matches, I silently, so as not to interrupt the fellow who was reading his paper aloud, signalled the person next to me for a light.

He surreptitiously placed a matchbook on the table in front of me. Matchbook covers sometimes feature ads for trade schools or restaurants, but this one bore a cartoon of an owl, captioned “Hooty the Owl.” The thought that it had been someone’s job to dream up those words and write them down, get them approved by a higher up, then have them set in type made me laugh — there’s no other word for it — hysterically. Professor Buell scowled a Zeus-like scowl and I scurried, giggling, out of the room.

One evening I was invited to his home to discuss plans for the next college Drama Society production, in which he always took an interest. Hanging on a living room wall of the Buell home was a very large, framed print of Dali’s Christ of St. John of the Cross. Playing softly on the phonograph was the Missa Luba, a recently recorded setting of the Latin Mass sung by a Congolese choir. Evidently, I was in the presence of a practising Catholic intellectual. Of course, he had never flaunted his faith in class. But for six weeks in the spring he was always pretty cranky; now I realized that he, a chain smoker, had given up cigarettes for Lent.

An annual feature of Jesuit schools is a retreat, several days of tedious, compulsory chapel attendance based on the Spiritual Exercises of St. Ignatius. But one afternoon in 1961 we beheld not another fearsome black robe ascending the pulpit, but Professor Buell, wearing his tweed jacket. I was so astonished to see a layman preaching in church that I can’t recall the subject of his homily. But I do remember how he concluded: “I can’t bless you, but we can all bless ourselves.”

That, a year before Vatican II, had a thrilling whiff of heresy.

The Loyola Chapel also happens to be the last place I saw Professor Buell. We were among those attending the funeral of Father Gerald MacGuigan, S.J., longtime chairman of the English department and a teacher generations of us genuinely venerated. It was widely believed that Father MacGuigan kept a list of graduates, his “Silver Seven,” who would go on to do great things. We all hoped we were on it — but we were certain that John Buell’s name led all the rest.