Although Leisha LeCouvie still has many years left in her work life, she’s just earned the advancement sector’s equivalent of a lifetime achievement Oscar. 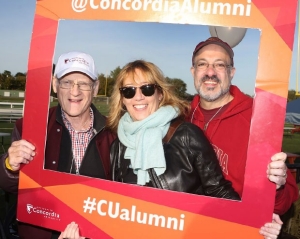 Senior director of Alumni Relations Leisha LeCouvie began volunteering for the Council for the Advancement and Support of Education District I in the 1990s.

Concordia’s senior director of Alumni Relations will receive the Carol and Stephen Hebert Award from the Council for the Advancement and Support of Education (CASE) District I for her exemplary volunteer efforts to the organization over nearly two decades.

The honour is one of six individual achievement and recognition awards given annually by CASE District I, which includes schools from Quebec, Atlantic Canada and New England in the United States.

CASE is an association serving educational institutions and the advancement professionals of more than 3,670 colleges and universities, independent and international schools, and non-profit organizations in more than 80 countries.

“This represents a larger picture of institutional excellence at Concordia,” says LeCouvie, who will accept the recognition at a ceremony in Boston, Mass., on January 27, during CASE District I’s annual conference.

“I started with CASE District I in the 1990s,” says LeCouvie, who worked as a marketing officer at Concordia’s Alumni Relations at the time. “I began by participating at their conferences — which I would eventually co-chair.”

LeCouvie also served on the organization’s board as vice-chair, stepping down shortly after she returned to Concordia in 2014. “The awards are selected by peers, so it’s great to see lots of people talking about Concordia,” she says.

LeCouvie is among a string of Concordians recently recognized by CASE District I.

Concordia’s University Communications Services received gold this year for best practices in communications and marketing, for its work on the R. Howard Webster Library transformation project.

Christine Mota, BA 77, Concordia’s director of Media Relations, won the CASE District I’s Eleanor Collier Award in 2015, given on the basis of service to one’s institution.