Holocaust survivor behind university’s Azrieli Institute of Israel Studies was an energetic philanthropist, real estate magnate and proponent of education
|
By Scott McCulloch

David Azrieli, LLD 75, visionary builder, developer and businessman, community leader and philanthropist, died on July 9, 2014. He was 92 years old. The Montrealer had just stepped down as chair of real estate developer Azrieli Group days before his passing. 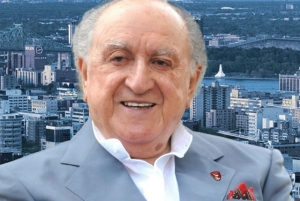 Members of the Concordia community will remember Azrieli as a man committed to advancing education and to deepening society’s understanding of Israel’s role in the world.

Bram Freedman, vice-president, Development and External Relations, and Secretary-General, described Azrieli as a key figure in Concordia’s growth and in the 2011 birth of the university’s Azrieli Institute of Israel Studies.

“David Azrieli was a visionary man in business and in philanthropy. His generosity towards Concordia was transformative,” says Freedman. “Just last spring, we celebrated his achievements by granting him an Honorary Life Membership into the Concordia University Alumni Association. Our community marks his passing with great sadness.”

Lillian Vineberg, BFA 83, a past chair of Concordia’s Board of Governors and long-time friend of Azrieli, calls his passing a tragic loss. “He loved the mission of Concordia. He was a terrific husband and father and he adored his wife Stephanie.”

Azrieli was born in Poland in 1922. His parents, brother and sister were killed during the Holocaust. He fled Poland in 1939 and fought in Israel’s War of Independence in 1948 before settling in Montreal in 1954, where he made his fortune in real estate.

Renowned as an architectural innovator, Azrieli graduated from Carleton University with a master’s degree in architecture in 1997, when he was 75 years old.

He studied at Technion – Israel Institute of Technology from 1943 to 1946. Later, in Canada, he earned a Bachelor of Arts from Université de Montréal.

The second of four children, Azrieli was an ardent philanthropist. In 1989, he established the Azrieli Foundation — which supports education, medical research, Jewish appreciation and Holocaust commemoration — to realize his charitable goals.

The Azrieli Foundation donated $5 million to Concordia in 2011 to establish the Azrieli Institute of Israel Studies, a research hub that looks beyond the lens of Israeli politics. Norma Joseph, the institute’s associate director, says: “David was a builder. His vision as a philanthropist helped create institutions. We are indebted to him for his commitment to Israel studies and to Concordia.”

Azrieli also established the first endowed fellowships for Concordia graduate students. In 1984, he helped create the Azrieli Holocaust Collection, some 8,500 titles on anti-Semitism, at Concordia University Libraries. In 1975, Concordia bestowed an honorary doctorate upon Azrieli, calling him an “exemplary contributor” to the university.

Last year, Azrieli donated $560 million and Azrieli Group stock to his Azrieli Foundation. His family has given some $100 million in philanthropic funds over the past 23 years.

Azrieli’s financial success, much of it derived from his real estate acumen, fostered his love of Canada and devotion to Israel, where he thrived. “I have two homelands,” Azrieli once said, “two places I love and where I have been blessed to do what I love best. My opportunity to express myself professionally started in Canada and eventually let me fulfill my dream of making a contribution to my other homeland, Israel. The two have always been entwined.”

An avid reader of newspapers and lover of classical music, Azrieli was named to the Order of Canada in 1984. He was invested as a Chevalier of the Ordre National du Québec in 1999.

Azrieli is survived by his wife of 57 years, Stephanie, GrDip 76, BA 71, and by his children, Rafael, Sharon, an opera singer and cantor, Naomi, CEO of the Azrieli Foundation, and Danna, vice-president of the Azrieli Group. 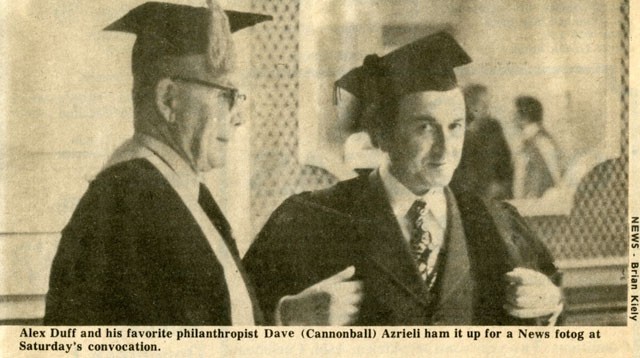 David Azrieli (right) at 1975 convocation where he received an honorary degree from Concordia University.