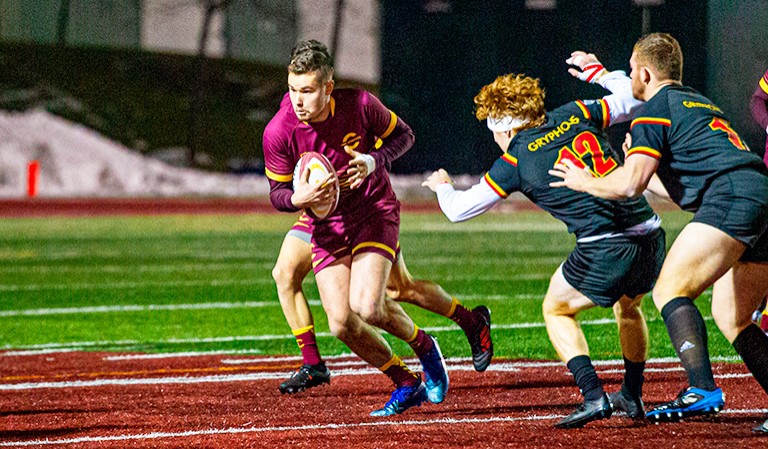 Day 1 of the Canadian University Men's Rugby Championship in Montreal followed a predictable course. All four of the top ranked teams advanced to the semifinals, including the host Concordia Stingers who edged out the Guelph Gryphons 10-7.

The Quebec champion Stingers, who went into the tournament as the fourth-seeded team, had a strong start and eventually built up a 10-0 lead on a try by veteran prop Stephen Martinez (converted by Aidan McMullan) and a penalty kick also by McMullan.

But the fifth-ranked Gryphons pushed back hard late in the game, getting a try from Giacomo Passarelli and a convert from Aria Keshoofy with six minutes remaining.

“When Guelph got that late try we were a bit worried,” said Martinez, Concordia’s Man of the Match. “But we turned it around and stayed focused.”

The Gryphons controlled the ball much of the last five minutes, forcing the Stingers to dig deep for the win.

“We won based on defence,” Martinez explained. “Our line speed was top notch and we didn’t have any breaks on defence. It also helped to have great support from our fans, our university, our families.” 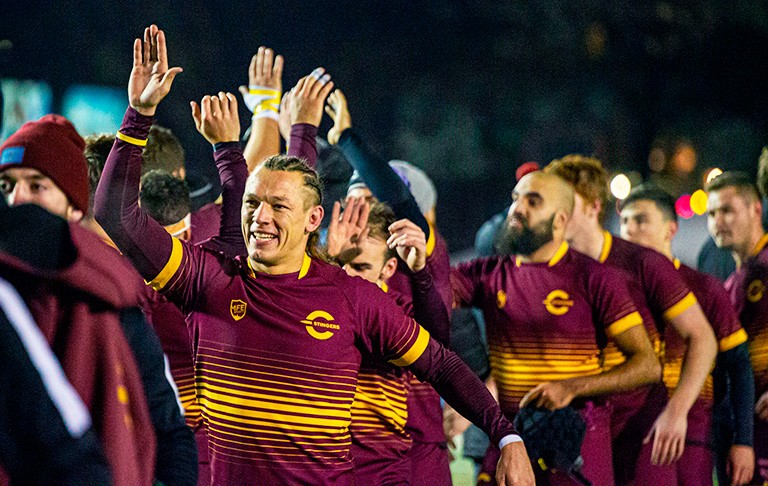 The Stingers will meet the No. 1 seed UBC Thunderbirds in the semifinals on Friday. The western powerhouse had no trouble taking down the eighth-ranked Brock Badgers 56-10.

UBC had a 35-3 lead at halftime and added another three tries in the second half. Eight different players scored tries and Jack Scher converted all eight of them. The lone Brock try came from Cillian O’Brien.

The No. 2-seeded Queen’s Gaels advanced to the semifinals with a 36-10 win over McGill University. The game was tight in the first half as the Gaels held a slim 12-3 lead after 30 minutes. But Queen’s broke it open with four tries in the second half. McGill’s only try was scored by Liam Pantis in the dying minutes of the game.

The Gaels will meet the No. 3-ranked Victoria Vikes in the other semifinal game. The Vikes opened the tournament with a dominating 48-0 performance over the sixth-seeded UNB Ironmen. Victoria scored eight unanswered tries. James O’Neill scored three and Liam Morrison had two.

Find out more about the Canadian University Men's Rugby Championship and get your tickets to the games.