Under her leadership, the Ombuds Office helped close to 8,000 community members
|
By Karen McCarthy

These are just a few of the words people use to describe Kristen Robillard who has served as Concordia’s ombudsperson for more than 15 years. 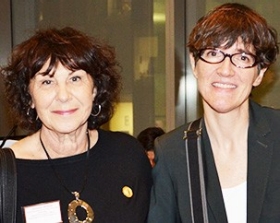 “Under Kristen’s leadership, the Ombuds Office has assisted close to 8,000 members of our community to navigate their way through the often complex workings of our institution, and to resolve concerns and complaints,” says Bram Freedman, vice-president of Development and External Relations, and Secretary-General. “She is highly respected and regarded and we’ll miss her dedication and passion for serving Concordia.”

Robillard is stepping down for health reasons, a result of many years living with multiple sclerosis.

The Ombuds Office, which celebrated its 35th year of operations in November 2014, functions independently of the university’s administrative structure. In fact, one of Robillard’s major achievements was to change the reporting structure for the office: it now reports directly to the university’s Board of Governors.

The office investigates complaints and concerns in an objective way to determine whether the complainant was treated fairly. The staff has full access to documents, records and reports to do their jobs.

“I strongly believe in the ombudsperson model, its principles, flexibility and success as an effective method for alternate dispute resolution,” explains Robillard, who emphasizes that her office’s services are confidential, impartial and accessible to all members of Concordia’s community.

The majority of people who seek out the office’s services are students, which involves providing information and coaching.  “When there are means to address a problem, the objective is to provide students with the tools to engage in the process on their own,” she says.

For Robillard, it’s all about fairness. “We’re trying to see what would be a fair recommendation or suggestion to make a difficult situation better,” she says.

Not only has she been a tireless advocate for fairness in fulfilling her role as ombudsperson, but Robillard is active in provincial, national and international ombudsman associations.

Since 2002, she has served on the executive of the Association des ombudsmans des universités du Québec. She is currently on the executive of the Association of Canadian College and University Ombudspersons and served as its president for two consecutive terms (2010-2014).  In 2010, she was awarded the Special Contribution Award for Academic Ombudsmanship by her Canadian peers.

“I hope my successor will enjoy the challenge of the work as I have. It’s been a privilege to serve Concordia, its students, faculty and staff members,” says Robillard, adding, “there’s never been a dull moment!”

A search for a new ombudsperson — the third in Concordia’s history — is underway.