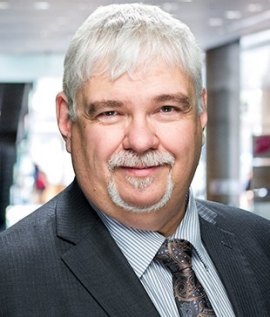 Concordia graduate Robert Beauchemin is a results-driven executive and entrepreneur with more than 25 years of experience.

Beauchemin assumed the position on January 19. He has more than 25 years of experience in leading high-performance global teams and large-scale international training solutions in multilanguage and multicultural settings. He was the founding partner of the software solutions firm UniGlobal, which was acquired by CGI.

“Robert has a great entrepreneurial spirit that will serve him well as CEO,” says Concordia President Alan Shepard. “He has a solid track record in project management and team building, and in creating a work environment that fosters high morale, high performance and innovation.”

Shepard also acknowledged the work of Patrick L. Kelley as interim CEO since April 30, 2014. “I thank Patrick for his leadership of KnowledgeOne while we conducted a national search for a new CEO.” Kelley took on the additional responsibilities while maintaining his current role as Concordia’s CFO.

“We have developed a competitive advantage in online learning, and we need to continue to develop our platform and course selection for a new generation of students who have come to expect high-quality online options. I look forward to working with Robert to further develop our digital learning strategy and offerings,” says Benoit-Antoine Bacon, Concordia’s provost and vice-president of Academic Affairs.

Concordia is a primary client of KnowledgeOne. Through a custom-made learning management system, eConcordia offers 60 credit courses across its four Faculties.

About Robert Beauchemin, CEO of KnowledgeOne

In this role, he was responsible for ensuring that the division remained at the cutting edge of eLearning and simulation technologies, and that solutions offered to clients were delivered on time and on budget with high levels of client satisfaction.

“I am excited and honoured to join KnowledgeOne as CEO, and I am looking forward to contributing to its continued growth and success,” says Beauchemin.

Along with a master’s degree in media studies from Concordia, Beauchemin possesses a bachelor’s degree in communication from the Université de Montréal.

Take a look at the current catalogue of online courses offered at Concordia through eConcordia and developed by KnowledgeOne.