Concordia mourns the passing of a beloved colleague, researcher and teacher, who won a 2011 Dean’s Award for Teaching Excellence

Ulrich Wassmer, who was an associate professor in the Department of Management at the John Molson School of Business (JMSB) from 2007 to 2013, passed away shortly before Christmas after a courageous battle with cancer. 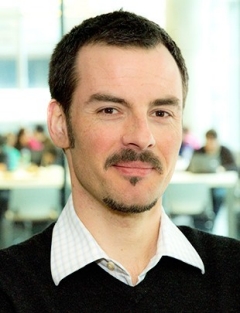 “A distinguished scholar, an exceptional teacher and a cherished friend”: Wassmer taught at Concordia from 2007 to 2013. | Photo by Anna J. Gunaratnam

“We extend our deepest condolences to his wife, Cristina, and their children, Fabio and Dario,” says Linda Dyer, the department chair. “Uli was everything one would want in a colleague — a distinguished scholar, an exceptional teacher and a cherished friend to many in our department.”

Wassmer’s research focused on interorganizational collaboration. His areas of expertise included corporate strategy and strategic industry alliances, specifically those in aviation and aeronautics.

While his contributions to research were very highly regarded, Wassmer’s loss will be more widely felt by the countless number of students on whom he made an impact, as evidenced by the outpouring of emotion on social media after his death.

One student described Wassmer as “an amazing, inspiring professor.” “Heartbroken,” wrote another. “He made me eager to go to class.” These remarkable educational talents were recognized by Concordia in 2011, when he received the JMSB Dean’s Award for Teaching Excellence.

Wassmer was born in Germany in 1969. He earned a degree in industrial engineering (Diplom Wirtschaftsingenieur) before moving to the US in 1994 to complete an MBA.