GAMERella asks women to ‘Boss Up’ 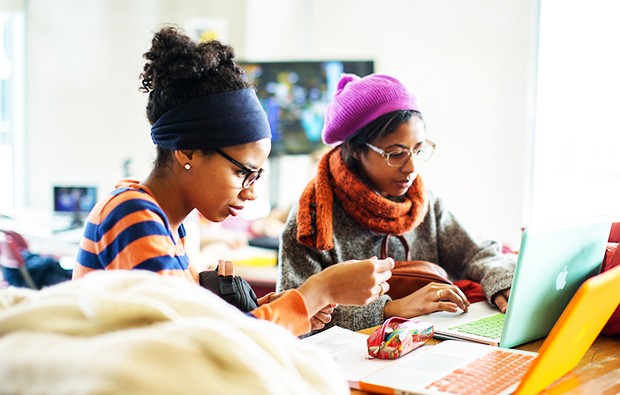 “GAMERella was conceived to prove that game jams are the safest, most exciting environments in which to create games.”

“The gaming world gives the impression of being a guys’ club where a woman is not welcome,” says Gina Haraszti, coordinator of Technoculture, Art and Games (TAG) at Concordia, an interdisciplinary centre for research in game studies and design, digital culture and interactive art.

As the organizer of last weekend’s TAG-sponsored GAMERella event — a jam directed specifically at female players and designers — Haraszti is doing her part to change that.

The all-day November 8-9 event facilitated the creation of more than a dozen different board games and video games on diverse platforms. While free of charge and open to everyone, it was marketed towards women and new game-makers.

A jam is, traditionally, a 24-to-48-hour meet-up of developers in which they plan, design and build games.

As the TAG website clarifies, “GAMERella was conceived to prove that game jams are the safest, most exciting environments in which to create games. Nothing is wrong; everyone is experimenting; no one is an expert. It is a place to improve skills, try out risky and unconventional design ideas, meet other developers, but above all, have fun.”

All resulting creations were inspired by the same theme, “Boss Up.” It’s a play on a common video game motif: to progress to the next level, you must defeat the powerful, intimidating “boss” character.

In a post-Gamergate world — the recent controversy that sparked debate about sexism and harassment in the gaming industry — Haraszti feels that this year’s theme hit the mark.

“Gamergate raised awareness, and I do see a lot women standing up and speaking up and bossing up,”  she says.

At GAMERella, registration reached its maximum capacity of around 80 people. On November 8, the participants were divided into groups of four or five per project.

Good spirits prevailed. There was a busy hum of activity on the 11th floor of the Engineering, Computer Science and Visual Arts Integrated Complex (EV) as the teams worked for nearly two days to develop the game concepts. The jam culminated in a lively playtest where the creators showed off the fruits of their labour.

Keynote speaker and feminist game-maker Kara Stone believes that events like this are essential for overcoming prejudice in the industry. “For women gamers, sometimes it can feel like you’re the only one. It’s awesome to have a community and to be around other people making games.”

On your own, Stone says, “it’s hard to get motivated and it’s hard to be inspired.” After her address, she joined a team and set about designing a game featuring a hair-flipping, high-heel-wearing character who walks away from sexist comments in the workplace.

There was certainly no shortage of ideas. Another game, designed by Team Bear, consisted of a 10-round card game that allows office workers to collect influence points through public and private acts by turning up the office thermostat or stealing someone’s stapler.

More needs to be done before women will feel completely accepted in the gaming world, Haraszti says, but GAMERella 2014 was a step in the right direction.

“I think a lot of stereotypes are still in action.” It’s time to boss up.

Find out more about Technoculture, Art and Games (TAG) at Concordia.