Raoul Wallenberg: “The spirit he embodied and the rescue work that he did is a testament to a lot of the work that we are trying to do and promote on genocide prevention.” | Photo by Thomas Veres

The life and legacy of the man who saved more than 100,000 Hungarian Jews during World War II will be honoured in Montreal next week with the last in a series of international panel discussions.

The Raoul Wallenberg Legacy of Leadership Project, an initiative of Concordia's Montreal Institute for Genocide and Human Rights Studies (MIGS), was created earlier this year in the interests of educating the public on the actions of Wallenberg and fostering discussion about the prevention of mass atrocities.

In June 1944, at the age of 31, Swedish native Wallenberg traveled to Budapest to serve as a diplomatic envoy. He fabricated counterfeit Swedish passports and established safe houses to protect Jews from German and Hungarian officials. 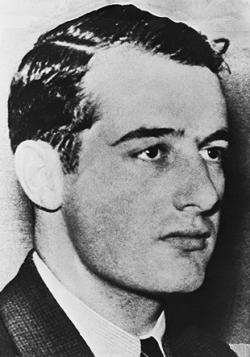 Photo courtesy of The Raoul Wallenberg Committee of the United States.

Near the end of the war, Wallenberg saved over 100,000 in a Budapest ghetto by reminding the Nazis that they would be tried as war criminals if they killed its occupants.

The diplomat disappeared on January 17, 1945, and his fate remains a mystery. It is generally accepted that he died in a gulag after being arrested for espionage by the Soviet Union. In 1985, the Government of Canada affirmed Wallenberg's great humanitarian efforts by making him the country's first honourary citizen.

Cotler is one of Canada's foremost authorities on Wallenberg. He served on a Swedish commission that looked into Wallenberg’s disappearance and has written extensively about him. Dieng, a lawyer, has served as Registrar of the International Criminal Tribunal for Rwanda since 2001.

Hudson, who previously held positions for the U.S. government in Sudan and Somalia, attributes aspects of contemporary peacekeeping to Wallenberg's legacy. “The spirit he embodied and the rescue work that he did is a testament to a lot of the work that we are trying to do and promote on genocide prevention.”

However, Hudson says the modern response to genocide has shifted: rescue plays a smaller role than it did in Wallenberg's time. “The idea of rescue is a very powerful one. A lot of the academic and policy discussions around responding to contemporary mass atrocities — whether in the Islamic Republic or Sudan — are more about the changing of government than about physically moving people and getting them out of harm's way.” 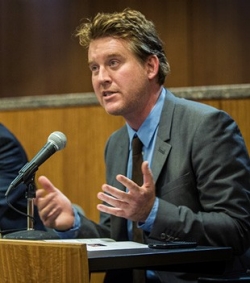 In the past month, The Raoul Wallenberg Legacy of Leadership Project has held events in New York, Ottawa and Toronto.

The project was established when Kyle Matthews, MIGS’s deputy director, learned of a open call from the Swedish government for project proposals to commemorate Wallenberg.

With the help of Swedish native Isadora Hellegren, at the time a MIGS intern and now the project’s leader, their proposal was accepted.

Through its website and a series of discussion panels featuring prominent speakers, The Raoul Wallenberg Legacy of Leadership Project aims to provide a platform for the collection of information on Wallenberg, to educate young people about his life and to create dialogue on the responsibility of ordinary citizens in genocide prevention.

“2014 is somewhat of a pressing time for many people in human rights,” Matthews says. “Looking at the Islamic State, Boko Haram, the problems in the Congo — there's a sense of powerlessness. But I think if we look at what brave people have done in the past, we see that individuals can do something.”

Register for the Raoul Wallenberg Legacy of Leadership Project event in Montreal. It is free, and takes place from 6:30-8:30 p.m. on October 29 at Room International II in the Centre Mont-Royal (2200 Rue Mansfield).

For videos and photos of past events, visit The Raoul Wallenberg Legacy of Leadership Project’s website.