As the Concordia newspaper marks its 35th anniversary, a veteran Globe and Mail reporter reminisces about the sheer joy of student journalism

Of course, The Link for me will always be about all those sleep-deprived hours I happily squandered in the grotty office whose designation I still remember — Room H-649 of the Hall Building.

And yet, one of my more bizarre Link moments took place at the NDG campus. 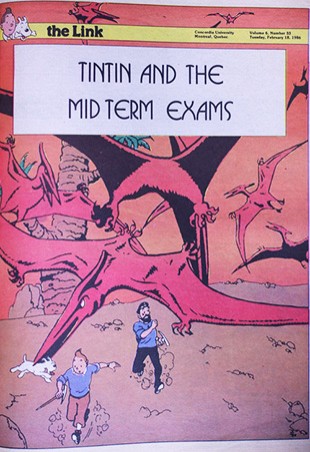 Courtesy of The Link

A long, long time ago, did I truly spend an exhausting, feverish spring night in a damp Loyola basement, ripping away pages after pages from every copy of the latest Link that week?

Three decades later, that weird memory is growing hazy but remains obstinate enough to linger in my brain like a bad after-taste.

The dim light in that basement, the dull, repetitive task, the ink-stained fingers, the growing irritation — and wasn’t I supposed to be in class later that morning? What was I doing with my life?

In the fall of 1983, midway into my undergrad studies in computer science, I had wandered into the newspaper’s office and drank the Kool-Aid. I hadn’t fully mastered English yet, it was my third language, so I helped with production and volunteered for all the thankless tasks — such as that memorable time we had to tear away one specific article from every copy of the Link’s 15,000-odd circulation.

We were in the middle of the elections for Concordia’s student association and the student judicial council ruled that one particular negative article was unfair to one team of candidates. It was either dumping the entire edition or yank away the specific page and salvage the rest of the issue.

Back then, The Link was one of many groups funded by the student association. Their money, their rule. We had to comply.

It was a bizarre time but then the four years I spent at The Link in the mid-1980s were like that, inspiring but also acrimonious, madcap, confusing, infuriating.

By the time I left, the paper was on its way to becoming financially autonomous, no longer shackled to the student association.

Freedom of the press also meant having to control our means of production.

Still fresh from the merger of The Georgian and The Loyola News, The Link kept offices at both campuses.

We published twice a week and each production cycle took two nights. The first night took place in a dingy apartment block off Sherbrooke West, where Loyola student groups were housed. That was the editing and layout night and my first year we still used manual typewriters. Cut-and-paste meant exactly that: cutting a chunk of text with scissors and repasting it elsewhere on the page with tape. We counted how many characters each story had, estimated the length, then designed the pages on mockup pages. The articles would be retyped at a typesetting shop operated by the Concordia student union.

The second production night, downtown at H-649, involved pasting the typeset galleys onto the mockup pages with hot wax and X-acto knives.

Compared with our friends at The McGill Daily, Linkies liked to think of themselves as being less politically dogmatic. Nevertheless, that fall of 1983, The Link was an aggressive paper, staunch in its leftist politics and publishing daring, controversial investigative articles alleging that varsity athletes were paid to play. It was too much for a handful of staffers, who decided to splinter off and start a new paper, The Concordian.

We also didn’t help our image by pulling juvenile pranks. The Link published on Tuesdays and Fridays. A new rector was being announced and we didn’t want the administration paper to be first with the news. So some of us decided to call the printer of the Thursday Report, pretending to be a Concordia administrator who asked that the TR not be delivered because of some purported labour strife. The Link thus got the scoop first.

Thus, a lot of people on campus didn’t like us: the administration, the student association, the Concordian staff, engineering students.

We bought a typesetting machine. The office smelled of heated paste-up wax and the more hardcore Linkies had their own precision X-acto knives.

It was a grind. Preparing the paper took four full nights each week. We spent so much time in H-649 that one handy staffer rigged a pair of bunk beds inside the office, two sleeping berths that were anchored on the ceiling with metal cables.

I became The Link's editor in 1987 (we didn’t call it editor-in-chief because we didn’t believe in hierarchy). I don’t remember many specific nights, just a mega-concatenated feeling of permanent burnout. The hallway leading to H-649 also housed the CRSG, the Sir George radio station, so the area was a magnet for misfits, career students and other campus oddballs.

Frankly, looking at some of the issues that we published then, I cringe at the poor design, earnest writing and inane inside jokes. And yet, I felt pride when later generations of Linkies take note of some of our shenanigans, such as Dwayne Perreault’s legendary interview with Hunter S. Thompson.

I was also pleased to see that two covers I designed are still evoked among The Link’s memorable front pages.

There were no computer graphics in those days. Each element in it, each colour, each drawing, had to be hand cut with an X-acto knife. It took hours and it was done just for the sheer joy of creating something nonsensical.

The Link steered me towards a career in journalism, at The Gazette, then for the last 20 years at The Globe and Mail.

The Link was my true undergraduate major. I didn’t just learn journalism there. I learned to pay attention to details, to be a good team player, to be a better person. I am proud to have that common experience with all of you, even those I have never met. We share the same bond.

The Link’s 35th anniversary reunion, held on October 18, 2014 at Concordia, brought together several generations of Link alumni with the student newspaper’s current staff. Speaking at the milestone event was a panel of seasoned journalists and former “Linkies.”

Listen to the podcast.

From Tu Thanh Ha's profile at The Globe and Mail

Tu Thanh Ha is based in Toronto. He spent 12 years as a correspondent for The Globe and Mail in Montreal, reporting on Quebec politics, organized crime, terror suspects, space flights and native issues. He has also worked as a reporter in the Globe's parliamentary bureau and as a legislature reporter in Quebec City for Montreal's The Gazette.