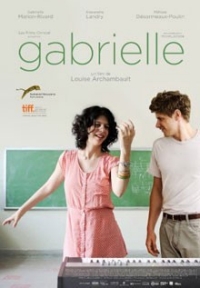 Archambault, who lives in Montreal, studied at the Mel Hoppenheim School of Cinema at Concordia's downtown Sir George Williams Campus.

A musical story of love and family, Gabrielle is about a developmentally challenged young woman who seeks to prove her independence and explore her sexuality.

The film shines due to the "heartfelt performance" by Quebec actress Gabrielle Marion-Rivard, according to the Toronto International Film Festival. Marion-Rivard, who has Williams syndrome, stars alongside Alexandre Landry and Mélissa Désormeaux-Poulin. Her outstanding appearance inGabrielle was rewarded with a CSA for Performance by an Actress in a Leading Role.

This marks the second year running that the work of a Concordia graduate was honoured with the year's top prize. Rebelle, directed by Concordia film production graduate Kim Nguyen, BFA 97, won in the same category.

"When you see a success like Louise Archambault's Gabrielle or Kim Nguyen's Rebelle, it really inspires everyone here -- students, staff and professors -- to maintain that tradition of excellence."

Gabrielle was additionally selected as Canada's submission for the 86th Academy Awards in the Foreign Language Film category but did not make the long list.