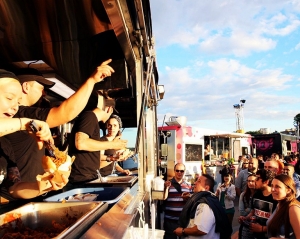 Alan Nash, Professor, Geography, Planning and Environment recently published an essay, "Breach, Bridgehead, or Trojan Horse? An Exploration of the Role of Food Trucks in Montreal’s Changing Foodscape" as part of a larger work about food trucks and their role in social justice and cultural identity.

For his essay, Nash notes that current Montreal by-laws have turned what could be an avenue for cheap street food into a marketing tool for high end restaurants. This, he argues, helps to boost the city’s image as a foodie tourist destination, but does not provide a much needed avenue for accessible and inexpensive meals.

Since the book’s launch, Alan’s work has been picked up by Les affaires and the CJAD morning show. His essay can be found in Food Trucks, Cultural Identity and Social Justice: From Loncheras to Lobsta Love, published this fall by MIT Press and launched on Oct. 30.