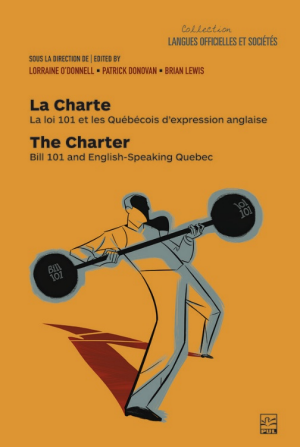 We are proud to announce the publication of the The Charter: Bill 101 and English-Speaking Quebec, edited by Lorraine O’Donnell, Patrick Donovan, and Brian Lewis, who are associated with the Quebec English-Speaking Communities Research Network (QUESCREN) at Concordia University.

The book examines the impacts of the Charter of the French Language (known as Bill 101) on English-speaking communities in Quebec and from a diversity of perspectives: historical, political, legal, and socio-economic. It takes into consideration the significant body of scholarship produced on the Charter over the four decades since the law was adopted.

The Charter features twenty chapters in English or French by researchers and engaged citizens. Authors include Pierre Anctil, Michael Bergman, Kahawinóntie Cheryl Diabo, Julius Grey, Yasmin Jiwani, Guy Lachapelle, Michel Paillé, and Dorothy Williams, among others. They explore topics such as demography and community vitality, judicial interpretations of the Charter, repercussions of the law on English minority language education in Quebec as well as on the provincial labour force. Also presented are perspectives from the English-speaking Black, Indigenous, and Jewish communities in Quebec.

The volume’s content builds upon “Les 40 ans de la loi 101 / Bill 101 at 40,” QUESCREN’s 2017 conference at the Acfas congress in Montreal. “The conference struck a chord,” write the editors in the book’s Preface. “Numerous researchers presented at it; many more attended, along with people from government and community sectors. [The Charter] still makes headlines, and we decided that a book was in order.”

Published by the Presses de l’Université Laval, the book is available now in both paper and electronic formats. You can flip through an excerpt or order your copy from the publisher’s website.