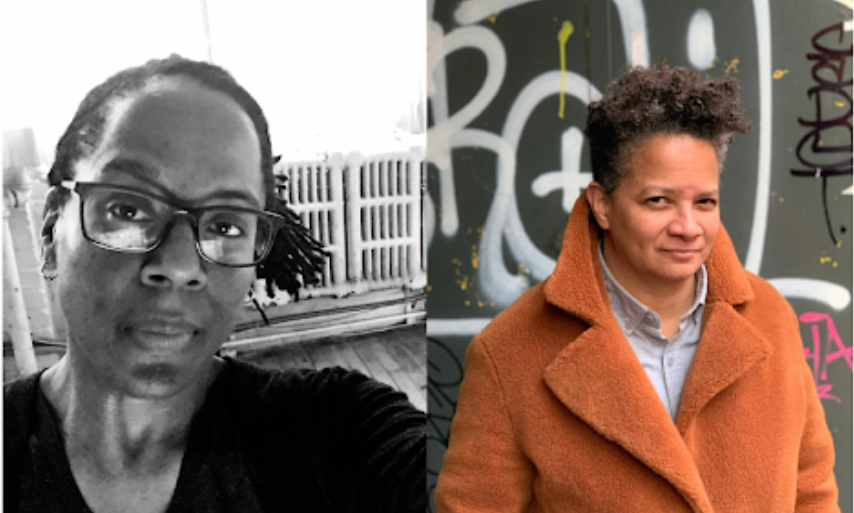 The Performing Arts Research Cluster (LePARC) and Milieux Institute invite artist scholars Deanna Bowen (Concordia University) and Kara Keeling (The University of Chicago) to a conversation using different languages to articulate blackness, the (de)construction of narratives around black bodies, identity and its shifts in space and time.

Join us for a dialogue at the intersections of media and queer theory, photography and gallery systems strategies, double consciousness, anti-racist operational systems, black feminist intervention, technology and culture politics.

Deanna Bowen is a descendant of two Alabama- and Kentucky-born Black Prairie pioneer families from Amber Valley and Campsie, Alberta. Bowen’s family history has been the central pivot of her auto-ethnographic interdisciplinary works since the early 1990s. She makes use of a repertoire of artistic gestures in order to define the Black body and trace its presence and movement in place and time. In recent years, her work has involved close examination of her family’s migration and their connections to Vancouver’s Hogan’s Alley and Black Strathcona, the “All-Black” towns of Oklahoma, the Kansas Exoduster migrations and the Ku Klux Klan in Canada and the U.S.

She is a recipient of a 2020 Governor General Award for Visual and Media Arts Award, a 2018 Canada Council Research and Creation Grant, an Ontario Arts Council Media Arts Grant in 2017, a 2016 John Simon Guggenheim Memorial Foundation Fellowship, and the 2014 William H. Johnson Prize. Her writing, interviews and art works have been published in Canadian Art, The Capilano Review, The Black Prairie Archives and Transition Magazine. Bowen is editor of the 2019 publication Other Places: Reflections on Media Arts in Canada.

Kara Keeling is a professor of cinema and media studies at the College at The University of Chicago. Keeling is author of Queer Times, Black Futures (New York University Press, 2019) and The Witch's Flight: The Cinematic, the Black Femme, and the Image of Common Sense (Duke University Press, 2007) and co-editor (with Josh Kun) of a selection of writings about sound and American Studies entitled Sound Clash: Listening to American Studies (Johns Hopkins University Press, 2012), and (with Colin MacCabe and Cornel West) a selection of writings by the late James A. Snead entitled European Pedigrees/African Contagions: Racist Traces and Other Writing (Palgrave Macmillan, 2003).