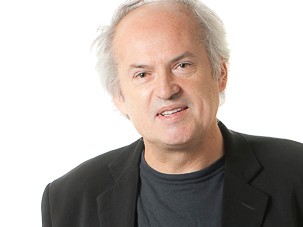 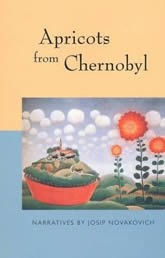 The bloody rupture of Yugoslavia has stained this past half-decade with ethnic hate, and the blood still flows. The Western conscience seems to have numbed and newspapers are increasingly stingy with the copy they expend on the region. Novakovich resurrects the experience, describing, with almost clinical accuracy, the dormant chauvinism in the Croatia of his childhood and the wrenching details of the malignancy's spread. We are indebted to these accounts for revealing the stark facts of life there, the unnamed tragedies too mundane for media attention. The seeming triumph of cruelty over humanity reawakens compassion, but why are there only four such stories, a miserly fourth of this collection of 16 previously published essays? The remaining 12 are indulgently detailed remembrances--of passports and border crossings, dreams of rock-stardom, hippie crash pads in Switzerland and cliches of American life: a mugging in New York, life on the Great Western Plains and the escapades of a farm cat. Each event may well be meaningful to the author, but a larger sense is missing--perhaps what astonishes an immigrant is too obvious for a native. Publisher:  Graywolf Press 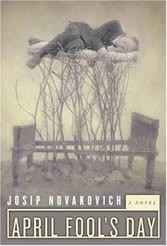 Ivan Dolinar is born in Tito's Yugoslavia on April Fool's Day, 1948 -- the auspicious beginning of a life that will be derailed by backfiring good intentions in a world of propaganda and paranoia. At age nineteen, an innocent prank cuts the young Croatian's budding medical career short and lands him in a notorious labor camp. Released on the eve of civil war, Ivan is drafted into the wrong army, becoming a pawn in an absurd conflict in which the rules and loyalties shift abruptly and without warning. But even in a world gone mad, one course of action remains eminently sane: survival.

Told with bitingly dark humor and a deep tenderness, April Fool's Day is both a devastating political satire and a razor-sharp parody of war.   Publisher:  Harper Collins 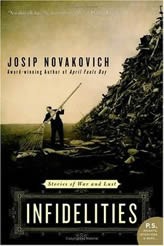 Tragicomedy of the highest order, this stellar collection is Croatian writer Novakovich's best ever.

Hailed as one of the best short story writers of the 1990s, Josip Novakovich was praised by the New York Times for writing fiction that has "the crackle of authenticity, like the bite of breaking glass." In his new collection, he explores a war–torn Balkan world in which a schoolchild's innocence evaporates in a puff of cannon smoke, lust replaces love, and the joy of survival overrides all other pleasures.

As Serb, Croat, and Bosnian Muslim armies clash in the cities and countryside of the former Yugoslavia, it's hard to tell the front lines from the home front. The characters in Infidelities––soldiers and civilians alike––are caught in the ridiculous, often cruelly whimsical contradictions of war and the paranoia and folly of those who conduct it. In "Ribs," a Croatian woman whose husband has already been taken by the war will go to any length to keep her son out of the army, including sleeping with the draft officer, a tryst that leads to an unexpected, and disturbing, spiritual vision. A Buddhist soldier in the Bosnian Muslim military is accused of being an informer to the enemy Serbs after his detachment ambushes itself in "Hail." A draft dodger is in the hospital for a transplant, in "A Purple Heart," when a high–ranking Croatian general steals the heart for himself (and dies) while the dodger suddenly discovers a new thirst for life. In "Spleen," a Bosnian émigré in America learns that even in the throes of passion she cannot find release from the haunting memories of her homeland.

These stories cover a broad sweep of time, reaching back to the first shots of World War I in Sarajevo and forward to the plight of Balkan immigrants in contemporary America. Throughout, acts of compassion, gallows humour, even desire arise from a landscape devastated by tragedy. Publisher:  Harper Collins

Salvation and Other Disasters 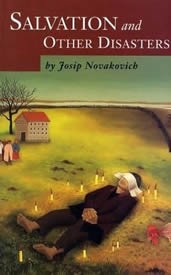 For those who think of Bosnia as more than a word, and the turmoil there as more tragic than a newspaper article can convey,Salvation and Other Disasters reveals another stirring element: the Balkan tragedy as a mirror of human suffering--and an unlikely site of occasional human joy--in every nation of the world. Novakovich's stories find the darkest ironies and give them a twist into a brutally interrogating light. Publisher:  Graywolf Press 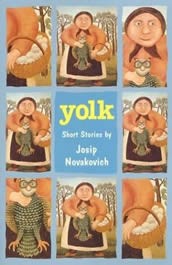 In prose that evokes a pervasive sadness punctuated by sudden violence, Novakovich wrestles with varieties of alienation: loneliness, unpopular spirituality, the psychological dissociation of the emigre, and generational misunderstanding. In "Dresden," for example, a man rejects his father for the father's Nazi past and is in turn rejected by his own son for his earlier Communist sympathies. Some of the stories deal with the current war in the Balkans: "Honey in the Carcase" tells of an old man who tries to keep his beehives functioning near a battleground, while, in "Hats and Veils," a previously secularized Muslim refugee from Croatia embraces conservative Islam upon moving to Vienna, wearing the veil when she ventures out of her home. These stories can be difficult to read because the emotions are so raw and so visible, but the power of the writing is undeniable.  Publisher:  Graywolf Press 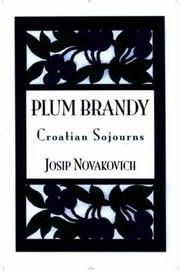 Novakovich records his journeys to find his roots, some to his native Croatia, some no farther than Cleveland, where he searches for the grave of his grandmother, who refused to return to Croatia with the rest of her family. This moving collection reflects the joys and the difficulties in returning to a homeland left behind. Publisher:  White Pine Press 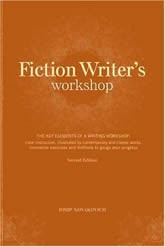 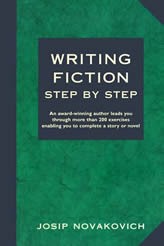