2015 Professional Training Program on the Prevention of Mass Atrocities

MIGS organized a two-and-a-half-day professional training program on the prevention mass atrocity crimes in cooperation with the Human Rights Research and Education Centre. This program held in Ottawa brought together 45 professionals and speakers interested in human rights, security, international affairs and atrocity prevention. You can find the full agenda on the conference website. Pictures are available on our Facebook page. 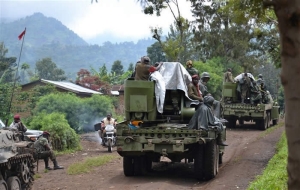 2014 Professional training Program on the Prevention of Mass Atrocities

On June 18-20, the Montreal Institute for Genocide and Human Rights Studies organized a three-day professional training program on the prevention of mass atrocities.

Plundered Cultures, Stolen Heritage - A Conference on the Targeting of Culture during Mass Atrocities

The very existence of national groups—their history, their memory and their future—rests on their members right to life, but scholars sometimes pay too little attention to assaults on the cultural identities of such groups which often precede physical attacks.

“Plundered Cultures, Stolen Heritage”— Concordia University’s contribution to Canada’s year of Holocaust Remembrance leadership— began the task of filling that gap and integrating our knowledge. Leading experts on the experiences of cultural destruction and mass atrocities suffered by the First Nations, Armenian and Jewish peoples assembled to discuss the motives of the perpetrators of these assaults, their impact, and the significance these attacks pose for restitution and reconciliation today.

Visit "Plundered Cultures, Stolen Heritage" to see the program and watch the keynote speech and panel discussions of the conference. 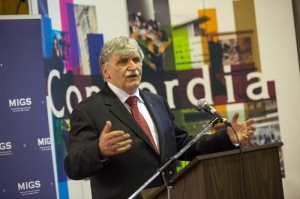 Professional Training program on the Prevention of Mass atrocities 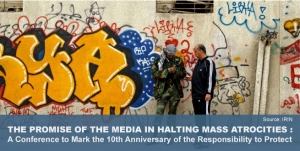 The Promise of Media in Halting Mass Atrocities: A Conference to Mark the 10th Anniversary of the Responsibility to Protect (R2P)

MIGS convened a conference to aid the media to fulfill its promise in halting mass atrocities and to help us achieve the goals of the Responsibility to Protect doctrine.

Some of the world's foremost experts on the role of media in preventing mass atrocities brought their latest insights to the conference. Visit the conference website to find out more about the panels and speakers.