With the Montreal International Jazz Festival around the corner, accomplished sax player takes a look back

In 1983, Dave Turner played the Jazz Festival with a sextet at the Théâtre St-Denis. "The live recording became the first episode of CBC's Jazz Beat." | Photo courtesy of Dave Turner

Montreal native Dave Turner, a part-time music instructor at Concordia, has been a key player in the city’s jazz scene since the mid-1970s. He joined the Vic Vogel Big Band in 1979; eventually becoming a featured soloist, lead saxophone player and its longest-serving member.

Turner has played at every major jazz festival across Canada, including, of course, the Montreal International Jazz Festival. We asked Turner to share his fondest memories of participating in everyone’s favourite summer event in Montreal.

I played at the very first edition of the Jazz Festival in 1980 with the Vic Vogel Big Band. Back then they had tents set up at the old Expo 67 grounds on Île Ste-Helene. In 1981 the festival moved over to Saint-Denis Street, and the Théâtre St-Denis became the main venue. That was such a great room to play. The sound was good, and while it was large enough to hold several thousand people, it wasn't like playing the Forum or anything like that.

I also played at the Théâtre St-Denis in 1982 with the Vic Vogel Big Band. The gig was recorded live by the CBC. It was Vic's first release of his big band and we played a fantastic concert. It was just  — one of those special nights when everything just happens perfectly and everybody in the band plays great. Just a great memory.

I was introduced to Vic by Andrew Homzy, a retired Concordia prof I'd met back in the mid-1970s. I started subbing for some of the older guys in Vic's band until they finally took me on as a full-time alto sax player. Homzy was the guy who set the whole thing up.

I have great memories of playing with Vic’s band. One year we backed up Zoot Sims, the legendary tenor sax player. Zoot was an especially nice guy and an incredible musician. He lived in New York, but he used to come up to Montreal a lot in the 1940s as part of Woody Herman's band. He later went off on his own and became a prolific recording artist who toured all over the world.

In 1983, CBC started a new jazz series called Jazz Beat. Katie Malloch was the host and Alain de Grosbois the producer. That year I had a sextet together with Ron Di Lauro, the trumpet player. We played at the Théâtre St-Denis and the live recording became the first episode of Jazz Beat. That was a big thing for us.

But one of my best memories is from 1985 when Jazz Beat put together a band called the Montreal All Stars. The ensemble featured myself with Charles Ellison, who is also a professor in the Jazz Studies program at Concordia; Oliver Jones, the great pianist; and Nelson Symonds, the amazing guitar player.

Symonds was originally from Hammond Plains, Nova Scotia, but moved here in 1954. All the musicians who came up from the States to play in Montreal just flipped over the guy, forever asking him to go on the road with them. But he never wanted to tour; he was happy just playing around town.

As the Montreal All Stars, we opened up for Tony Bennett. That was a great experience. Unlike many big stars, Bennett didn't spend most of our concert up in his dressing room. He was standing in the wings throughout our whole performance, and every time I went off stage after my big feature, he'd shake my hand saying, 'It sounds really good!' He was a genuinely nice guy. I was thrilled to meet somebody like him, because you always hear all of these stories about big stars being snobbish, but he was just completely down to earth. 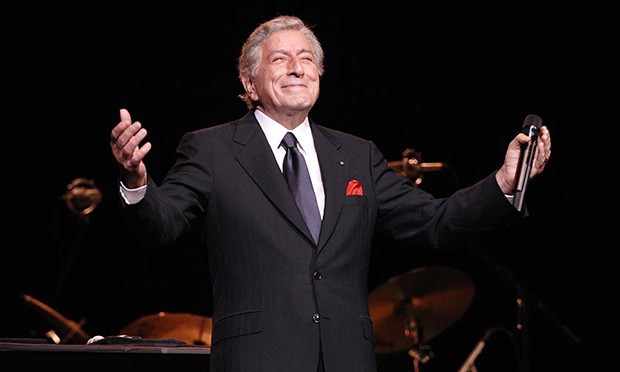 "Tony Bennett was standing in the wings throughout our whole performance, and every time I went off stage after my big feature, he'd shake my hand saying, 'It sounds really good!'"

Another great guy we played with was Dizzy Gillespie. This was with Vic Vogel’s Big Band in the late 1980s. By that time they'd moved the Jazz Festival to the area around Place des Arts, where it's centred now.

The concert took place on a Sunday night in Salle Wilfrid-Pelletier. Dizzy came up on Saturday and brought all these big band charts with him, so we rehearsed together for a couple of hours and the next day we went and played the concert.

During the intermission, we were backstage in the dressing room when a staff member came and told us, “Okay, we're going to lift the curtains in five minutes so we need you onstage.” They were looking for Dizzy but he'd taken off and they didn't know what he was doing. They were looking for him all over the place!

Finally, he comes walking on to the stage. The curtains were still closed, but he came up to the front of the band and told us a really dirty joke. When the curtains opened, we were all cracked up, laughing. The whole band was in stitches. I don't know what the crowd thought was going on, but that was a riot. He was a really special guy and very astute about so many things; not only music, but all kinds of stuff.

Vic played the Montreal Jazz Festival every year up until 2014. I played with him for most of those years, but a couple of times I couldn't do the gig because I was on tour out in Western Canada or in Europe. It has always been a great experience.

That's where I got to play with a lot of the big names from elsewhere. It was always a neat learning experience, and a real treat to meet these guys. Ninety per cent of them were really nice people. A couple were jerks, but very few of them.

One guy who was super nice was Freddy Hubbard, the great trumpet player, who played with us at the jazz festival in 2001. He was just a fabulous guy to hang out with and talk with. He had a great sense of humour.

Who to see this year

Lady J and the Jazz Cigarettes is a group of Concordia alumni and students who will be playing on July 7 at Place Heineken and Complexe Desjardins Grande-Place. The first show starts at 1 p.m. and the second is at 5 p.m.

Find out who's playing at this year’s Montreal International Jazz Festival.