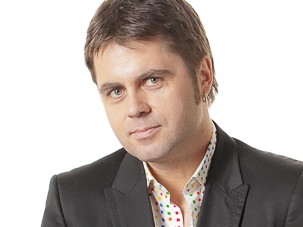 The Iron Whim: a fragmented history of typewriting

The Iron Whim is an intelligent, irreverent, and humorous history of writing culture and technology. It covers the early history and evolution of the typewriter as well as the various attempts over the years to change the keyboard configuration, but it is primarily about the role played by this marvel in the writer's life. Darren Wershler-Henry populates his book with figures as disparate as Bram Stoker, Mark Twain, Franz Kafka, Norman Mailer, Alger Hiss, William Burroughs, J. G. Ballard, Jack Kerouac, Hunter S. Thompson, Northrop Frye, David Cronenberg, and David Letterman; the soundtrack ranges from the industrial clatter of a newsroom full of Underwoods to the more muted tapping and hum of the Selectric. Wershler-Henry casts a bemused eye on the odd history of early writing machines, important and unusual typewritten texts, the creation of On the Road, and the exploits of a typewriting cockroach named Archy, numerous monkeys, poets, and even a couple of vampires. He gathers into his narrative typewriter-related rumors and anecdotes (Henry James became so accustomed to dictating his novels to a typist that he required the sound of a randomly operated typewriter even to begin to compose). And by broadening his focus to look at typewriting as a social system as well as the typewriter as a technological form, he examines the fascinating way that the tool has actually shaped the creative process.

Guy Maddin is Canada's most iconoclastic filmmaker. Through his reinvention of half-forgotten film genres, his remobilization of abandoned techniques from the early history of cinema, and his unique editing style, Maddin has created a critically successful body of work that looks like nothing else in Canadian film. My Winnipeg (2008), which Roger Ebert called one of the ten best films of the first decade of the twenty-first century, has consolidated Maddin's international reputation.

In this sixth volume of the Canadian Cinema series, Darren Wershler argues that Maddin's use of techniques and media that fall outside of the normal repertoire of contemporary cinema require us to re-examine what we think we know about the documentary genre and even 'film' itself. Through an exploration of My Winnipeg's major thematic concerns - memory, the cultural archive, and how people and objects circulate through the space of the city - Wershler contends that the result is a film that is psychologically and affectively true without being historically accurate.   University of Toronto Press 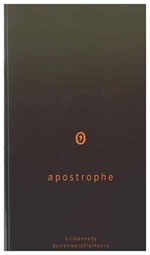 In the tradition of the phonetic poems of Hugo Ball and the "readymades" of Dada, this exploration of the nature of verse straddles the line between form and nonsense, between intention and happy accident. An apostrophe is a poetic figure of speech in which a person, abstraction, or entity is addressed as if it were present; it is also the name of a 1993 poem in which every line is an apostrophe. This project, in which an internet search engine innovatively employs the lines of the 1993 poem as starting points for searches, allows the poem to expand and continue infinitely. The search engine is rigid but indiscriminant, and words and phrases that might not otherwise meet collide and carom away in an unpredictable manner. By turns poignant and banal, the resulting poems are challenging and relevant to a world of increased technological input and intrusion. ecw press

The Alphabet Game a bpNichol Reader 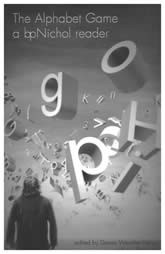 A member of the sound-poetry collective, The Four Horsemen, winner of a Governor General's Award for Poetry and writer of Fraggle Rock, bpNichol was one of Canada's most important poets

All of Nichol's writing is distinguished by his desire to create texts that are engaging in themselves as well as in context, and to use indirect structural and textual devices to carry meaning. The astounding range of Nichol's practice included musical theatre, children's books, comic book art and collage/assemblage. Broadly spanning the history of Nichol's work, The Alphabet Game: A bpNichol Reader includes both classics and esoteric treasures. From the early typewriter poetry of Konfessions of an Elizabethan Fan Dancer and Nichol's life-long work of poetry The Martyrology, to the heartbreaking prose of Journal and the whimsical autobiography of Selected Organs, this collection maps the literary career of this enigmatic poet.

For first-time readers of Nichol, this comprehensive collection is a perfect introduction to his groundbreaking work; for loyal Nichol fans, this reader is the the long-awaited compilation of his less readily available work.     Coach House Books