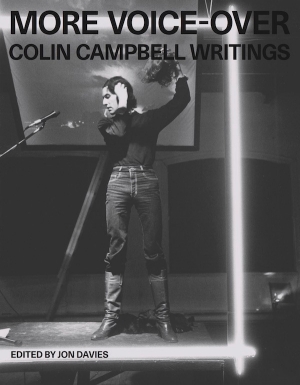 Colin Campbell (1942-2001) is widely recognized in the field of video art for his provocative, thoughtful, and wry depictions of sexuality, gender, and social norms and expectations. The creator of more than fifty video works including Hollywood and Vine (1977), Bad Girls (1980), and Dangling by Their Mouths (1981), Campbell was also active in the artist-run centre movement, helping to establish Vtape, Canada’s largest distributor of video art. More Voice-Over: Colin Campbell Writings gathers for the first time a broad selection of Campbell’s writings for video and beyond. Edited and with an introduction by Jon Davies, it includes scripts as well as magazine articles, artists’ books, lectures, short fiction, and excerpts from his two unpublished novels. In these witty and perceptive texts, Campbell considers sexuality and gender, desire and longing, power, history, his own artistic practice and community, artist-run culture, video and its audiences, censorship, the AIDS crisis, and more. Covering three decades, More Voice-Over illuminates Campbell’s development as a central figure in the history of video art as well as the importance of writing to his work and to video as an artistic medium.

“This collection of astonishing texts confirms Colin as one of our greatest raconteurs.  His video eye may have framed our fragrant, lurid foibles, but it was his video ear that most eloquently captured our blurts and falters: those words we struggle and seduce with, those we misspeak and mishear, voiceovers that snip and bite and blur and dangle from our mouths. Delirious queer words, deliciously out of step.”
-John Greyson, video/film artist: Fig Trees, Lilies, Zero Patience

“I discovered the remarkable artwork of Colin Campbell around 1975. I was taken by how he brazenly stood alone and faced a video camera to record his witty and urbane monologues. Straddling the line between fact and fiction, his videos showed him brilliantly delivering a text with the candour of a TV commercial actress and the veracity of a handsome newscaster. I exhibited Colin’s early masterpiece, Conundrum Clinique (1981), and quickly added it to MoMA’s video collection. More Voice-Over will secure this pioneering artist’s richly deserved place in video art’s history.”
-Barbara London, author of Video/Art: The First Fifty Years, initiator of the podcast Barbara London Calling, and former MoMA curator

"More Voice-Over: Colin Campbell Writings is an impressive labour of personal commitment and erudition on the part of editor Jon Davies. It also confirms the groundbreaking brilliance and coherence of Colin Campbell as a writer, hitherto known as a pioneering Canadian queer video artist. Davies’s important collection fills a major gap in international as well as English Canadian cultural history."
-Thomas Waugh, co-editor (with Brandon Arroyo) of I Confess! Constructing the Sexual Self in the Internet Age

The e-book version of this title will be published in July 2021.

Born in Reston, Manitoba, Colin Campbell studied at the University of Manitoba and Claremont Graduate School in California. He began teaching at Mount Allison University in New Brunswick, where he made his first video works. He moved to Toronto in the early 1970s where he taught at OCAD University and the University of Toronto. His works have been exhibited internationally, including at documenta 6 and the 39th Venice Biennale, and are in the permanent collections of the Museum of Modern Art, the Art Gallery of Ontario, and the National Gallery of Canada, among other institutions. His videos are distributed by Vtape in Toronto.

Jon Davies is a PhD candidate in art history at Stanford University. He received his BFA at Concordia University. He has held curatorial roles at The Power Plant Contemporary Art Gallery, Oakville Galleries, and the Art Gallery of Ontario.