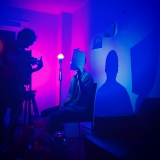 M. is a very confident person who sticks to her principles more than anyone I know. 0n her set, her [main] actor didn’t respect anyone and started telling the students what to do. [The students] didn’t take it well because they had their own egos. She, the director, was trying to deal with all of these situations. She didn’t sleep because she often said: “That’s okay, I’ll deal with it.” She ended up taking on so many jobs that her film ended up suffering because of it. She’s human and does not have time to take on fifty thousand things. I took this photo because she was doing this motion all through her set. She kept second guessing herself, but she kept the front up with everyone else. I was her PM and the only one to whom she came: “I don’t know what to do. Is my film going to make it?” This picture could also be titled: “I am tired of this, it’s not working.”

In CEGEP, I made a lot of films with a group of 9 friends. Then, we all moved [from a small town] to Montreal to go to school. All of us applied for Concordia’s film school, but I’m the only one who got in. The woman in this photo was one of these friends, and we were really close. She really wanted to get in [the film production stream]. So, she took film studies but ended up dropping cinema altogether. She had a lot of ideas and tons of plans, but she moved on to something else. After we moved to Montreal, we actually didn’t see each other very much. I took this photo at a cottage, where all of us [from CEGEP] spent our first Christmas since moving. We had all changed. I took this photo to remember the past friendship and the innocence of making films together in CEGEP. We had big ideas, and we wanted to do all these things to make films. We had so much fun, but we grew up. She represents all the women who had been in cinema for a while. It did not work out for them, but they understand that world too. She ended up coming out fine. She found other things that she is passionate about.

I took this photo of my roommate in my kitchen. We are both from a small town and have known each other since high school. We actually had a huge fight before this photo was taken. But we sat down at the table, ate chips, and talked about everything. She is my therapist of sorts. This friendship sustains us and enables us to help each other get through hardship. She’s not directly in cinema. But she plays a big role keeping me sane and getting me out of bed when I don’t want to go to work. She is a woman of cinema without being on set. You need a friend who isn’t in cinema. You need a break. They bring new perspectives of filmmaking. This photo captures a sense of gratefulness. I took this picture for others in the [film] industry to think about friends who ground them and to honor the few people who understand what we are going through [as filmmakers].

This photo shows how my social life and my work life really started to merge. This woman [in the photo] was my roommate who wanted to take part in M.’s film. In this picture, M. was taking photos to make the cover of a magazine [featuring erotic androids] as a prop for the film. This photo wasn’t just about how my two worlds collide, it also captures a very interesting aspect of women in film, as we were learning how to make a critique of female sexuality. [My roommate] and I ended up being extras in a club scene. We [usually] do not dress up to please men. So, wearing very sexy clothing for this film was something completely new for both of us. I wore makeup for the first time in three years. It made me realize I’ve become a bit man-like because I’ve been working in the [film] industry. When I am on a set, I won’t put makeup on. I won’t make myself look cute for a guy. I need to wear pants that won’t rip when I bend down, won’t fall down, and will stay up. I often wear a black shirt because you can’t see sweat stains. I just want to blend in. When I purchase clothes, I always ask myself like: “Can I wear this on a film set?”

We held it high

I wanted to be DOP on this set. The director at first said “yes”, but then put me as gaffer and gave the DOP position to his friend. I was frustrated because I really did not feel like being a gaffer, but I said “yes” because it was an opportunity. I met S. who was in her third year and was the key grip. S. was the only woman in third year who likes doing technical jobs. It seems that I’m the only one in second year who is also interested in doing such work. She has a lot of understanding of how hard it is for a woman to work in this field. We immediately bonded and worked really well together and supported each other. She also got frustrated because it was us who made the lighting plans and did a lot of DOP’s job. In the end, we gained a lot of respect from everyone else. In this photo, we were playing around on the set. We were having a lot of fun with each other mostly. After this filming, we created a partnership. I helped her out on some outside contracts.

I have a love & hate relationship with this view

On this set, I was with S. to set up all the lights. I sat down in the back and took this photo during the filming. Honestly, I am not going to work with [this director] again. He tends to stick to his idea so hard that other people suffer from it. He will even throw other people under the bus. For instance, we were watching some of his footage. He was unhappy with how his film turned out.  In class, he said: “Well, it’s all because of the lighting.” I was the one doing lighting. So I was thinking: “What the hell does that mean?” He probably meant he didn’t have a good idea of what he wanted for lighting, or he could also have meant that I did a shitty job. But you can’t say stuff like that in class, because people will take it wrong. There are plenty of other people working on his film too.

The DOP decided to add a shot at the end of the day on the last day of shooting. We were in a store and the floor was wet. The DOP wanted us to walk fast with the lights and the camera, which is almost as expensive as a small home. I said “no” because it was dangerous. There could be an electrocution if someone pulled out the cables by accident. I had told the DOP about 25 times how dangerous it was. But the DOP wasn’t listening to me and wasn’t cooperating at all. Then I told the director: “Come and control your DOP.” I’m a gaffer underneath [him], I can’t tell a DOP what to do. Finally, he came over and told the DOP to kill that part of the lighting. But the DOP still ended up doing what he wanted. I walked out of that place because I was fed up. On that set, I found out that being a woman means you have to tell them like 50 times, and still they won’t necessarily listen to you. At first, I thought it was because the project took the upper hand. Then it happened again in other situations. I realized it was very much because I’m just a ‘girl.’ I didn’t know it at the time. While taking this photo, I was frustrated at not being listened to. S. and I were at the far back. We didn’t see anything. But we were doing a lot. All that lighting was the result of our work. We should have been standing by the men over there. But we were at the back.