OLD MEDIA AND THE MEDIEVAL CONCEPT 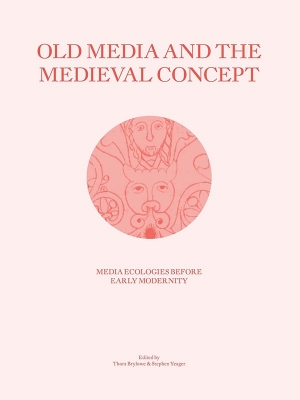 The so-called “Middle Ages” (media æva) were the mediating ages of European intellectual history, whose commentaries, protocols, palimpsests, and marginalia anticipated the forms and practices of digital media. Edited by Thora Brylowe and Stephen Yeager, this ground-breaking collection of essays calls for a new, intermedial approach to old media periodizations and challenges the epochs of “medieval,” “modern,” and “digital" with the goal of enabling new modes of historical imagining. Essays in this volume explore the prehistory of digital computation; the ideology of media periodization; global media ecologies; the technics of manuscript tagging; the haptic negotiations of authority in medieval epistolarity; charisma; and pedagogy. Old Media and the Medieval Concept forges new paths for traversing the broad networks that connect medieval and contemporary media in both the popular and the scholarly imagination. By illuminating these relationships, it brings the fields of digital humanities, media studies, and medieval studies into closer alignment and provides opportunities for re-evaluating the media ecologies in which we live and work now.

“Old Media and the Medieval Concept successfully brings the richness of pre-modern media history into closer and more productive conversation with the field of media studies. This is vital work, since the orientation of media studies is often presentist or futurist, while manuscript studies, which is all that narrow understandings of ‘premodern media history’ might seem to include, has sometimes neglected the insights of media theorists working mostly with later material. By cleverly refiguring the ‘Middle Ages’ as the ‘mediating ages’ between the classical and Biblical texts that medieval manuscripts often contain or reference, and a later, putatively more enlightened historical moment, this volume’s distinguished contributors demonstrate that the histories, ecologies, and archaeologies of medieval media offer a vital means of understanding both then and now.”
-Arthur Bahr, MIT

“From colonial coconut cups to mnemonic verse tags in manuscripts, Old Media and the Medieval Concept unearths a rich hoard of early media and brings them into dialogue with our present moment. The result is a vibrant collection that transgresses boundaries of period, place, and field. Media historians will look to this book, and the series it inaugurates, as a lodestar pointing us toward what the field could be: theoretically engaged, historically acute, and always attentive to the politics of our work.”
-Whitney Trettien, University of Pennsylvania

The e-book version of this title will be published in summer 2021.

Thora Brylowe is Associate Professor of English at the University of Colorado Boulder. She is a member of the Multigraph Collective and the author of Romantic Art in Practice: Cultural Work and the Sister Arts, 1760–1816.

Stephen Yeager is Associate Professor of English at Concordia University. He is the author of From Lawmen to Plowmen: Anglo-Saxon Legal Tradition and the School of Langland.