‘He was like a second father to us’: longtime, one-of-a-kind Stingers coach Pete Regimbald’s 50-year career spanned Concordia’s football history 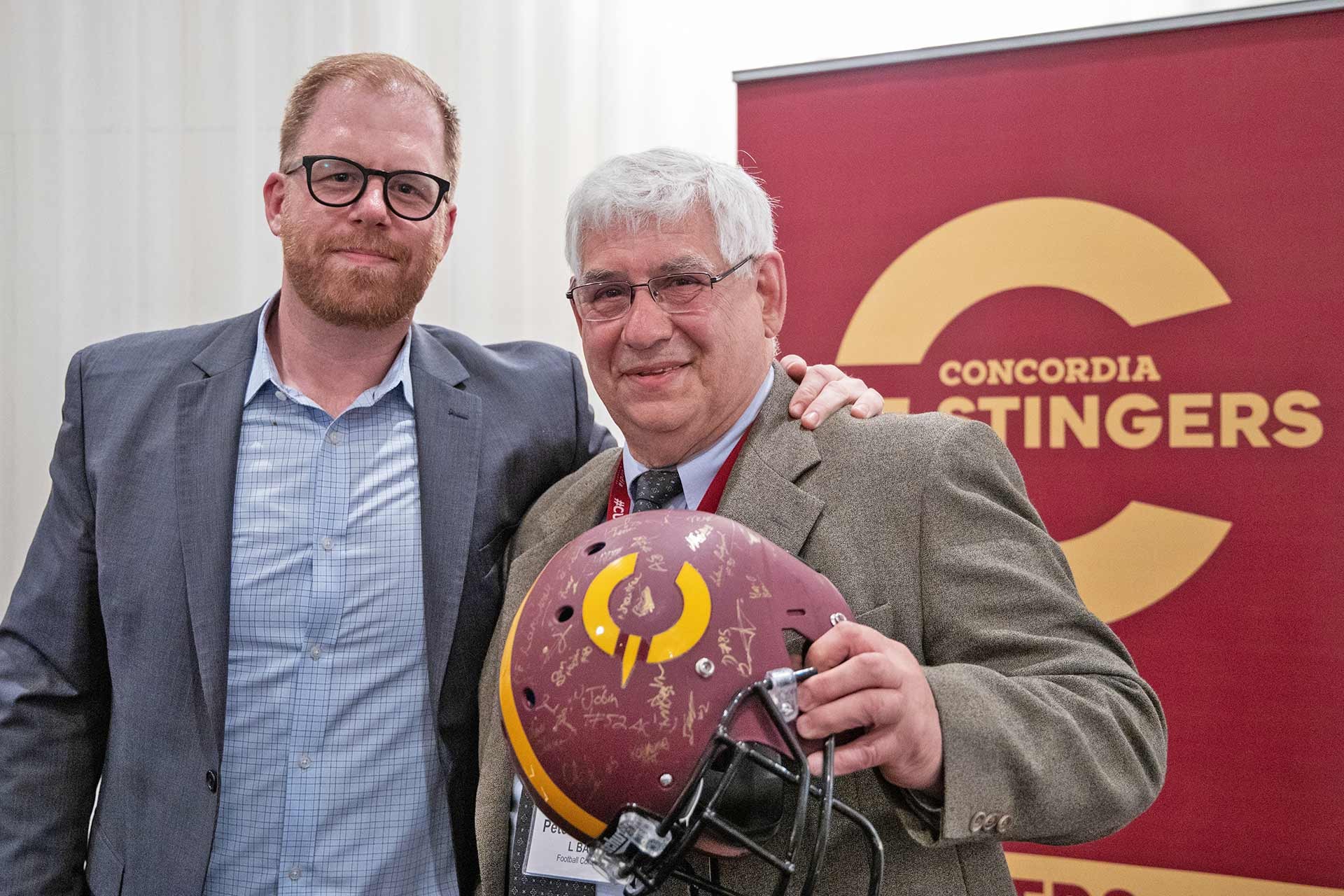 'He’s just a good person, somebody you could always go to': current Stingers coach Brad Collinson (left) has known “Coach Reg” since his early teens. Here they are together at the May 4 Stingers football banquet.

Fifty years into his coaching career, Pete Regimbald, BA 73, was determined to properly demonstrate how to catch an onside kick.

The remarkably faithful commitment of Regimbald — who was the guest of honour at the annual Stingers football banquet on Saturday, May 4, 2019 — to Concordia's football program came to an end with his retirement this season, though not before he delivered a hands-on example to the Stingers.

“It was a Friday practice so we want to keep a good tempo at practice and we were rehearsing the onside kick,” said Regimbald, who was 75 years old at the time. “And we needed someone to catch the ball and we couldn’t seem to attract anyone to come and get the ball, so I got underneath it. I tell you things change over the years.

“I was under the ball real well and got it focused, and I’ve caught hundreds of those without any problems whatsoever, but it seems that all of a sudden my eyes fail and I came short to the ball. But I did get it at the fingertips of my hand and so I thought I’d better catch this one because everybody’s going to be really after me. So I tipped it a couple of times and eventually had to dive for it, and I did catch it. But I’ll tell you, over the years you lose quite a bit.” 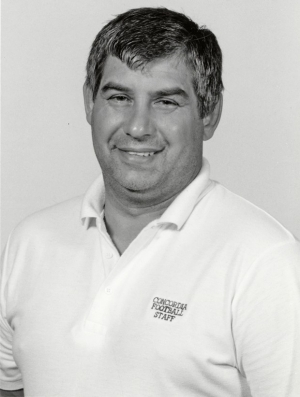 Stingers coach Brad Collinson, BA 05, who has known “Coach Reg” since his early teens, was not surprised Regimbald physically demonstrated to his players the need for “good hands” on that particular special teams play.

“I’ve seen quite a few things in my time with him,” Collinson said. “He’s an older gentleman now but he still has some youth in him. The kids don’t expect it out of him and then he’ll go out there and he’ll do something off the cuff, just to calm everybody down a little bit. As much as it has to be serious, just realize that we’re playing a game, let’s have some fun here, too.”

Ralph Loader, BComm 71, MBA 75, faced Regimbald and the Warriors when he played for the Sir George Williams Georgians from 1969-70. A few years prior he had to tell a junior team’s head coach that he was not ready to move up to that level.

“His response was highly negative,” Loader said. “He happened to have a helmet in his hand and he fired it across the room. It went clattering all over the place so everybody was aware what was going on, and he was screaming at me. Then I sat down to get out of my equipment and Pete was sitting next to me. And he put his arm around me. ‘Look, Ralph,’ he said, ‘you’ve got to make these decisions on your own and I don’t want you to have any concern about the reaction of other people. You’ve made your decision and we respect it.’

“And I hope that story explains my most lasting impression of Pete. I mean, it’s never left me since then. This gentleman is one of the most gentle and caring people that I’ve ever met. And I think that’s the source of his tremendous ability to motivate young people.”

Regimbald (centre) with the Warriors, Georgians and Stingers who came out to honour him at Homecoming 2018.

Paul Chesser, BA 94, GrDip 97, began playing for Regimbald as a defensive lineman with the Stingers in 1989, and joined him on the coaching staff from 1994-99. He remembered Regimbald delivering just the right touch prior to Concordia’s historic win in the 1998 Atlantic Bowl.

“The team was pretty tense on Friday practice in Halifax,” Chesser, Concordia’s vice-president Advancement, said. “It was pouring rain and Pete didn’t have a hat. So he took the shower cap out of the hotel and he went out there and he drilled the men through the special teams paces, as you do on a Friday, kind of a pregame walkthrough. And he reminded everybody how important this game was, how important special teams were going to play in the game. And he was really serious while he had this shower cap on his head, just to lighten the mood a little bit.”

“There was no trick to get people up or not, but it seemed to have worked,” Regimbald said. “They got a kick out of it and we did have a good practice and consequently we had a great game the following day on special teams.”

“We blocked a punt, we kicked a field goal in the last minute of the game to take the lead, we picked up a fumbled punt, ran it in for a touchdown, and we returned a punt to set up that winning field goal,” said Chesser. “On Concordia’s greatest team, at Concordia’s greatest hour, maybe, in football, winning the Atlantic Bowl, special teams were the reason we won that day.”

Regimbald coached Collinson when he played for the Stingers in the early-2000s. In his last season as a coach, he proved an invaluable resource to the rookie head coach.

“And they just didn’t want to disappoint him because he would do everything to help you in any which way that he could. So that’s something we’re going to miss.”

The coach is still helping. The Coach Pete and Diane Regimbald Football Award has been established to benefit a varsity football athlete, providing financial support and recognizing hard work and commitment to the team.