‘I’ll always be one of your most grateful and proudest alumni’
|
By Léandre Larouche, BA 19
Source: Concordia University Magazine

Over the past three years, I’ve written to many people who have had a positive impact on my life to say thank you. I’ve written to friends, parents, professors, employers, mentors. The reason I made this a habit is that I have much to feel grateful for – and think it’s the right thing to do. 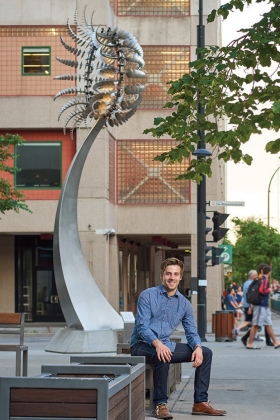 Léandre Larouche sits near the Di-Octo sculpture on the Sir George Williams Campus.

As I finished my last semester at Concordia and crossed the stage on June 10, 2019, at Place des Arts, it became clear that you were the next one on the list. Almost everything I feel grateful for directly or indirectly has to do with the past three years spent with you.

I grew up in rural Québec, in a town where the language of Shakespeare isn’t commonly spoken. Had it not been for an elementary-school English teacher, Steven Jansma, I never would have found a passion for the language. However, after Steven taught me, I somehow knew that learning English – and learning it well – would be the key to my success.

I began dreaming of being fluent, of living and writing in English. The culture made it attractive and the challenge compelling: mastering English to the point where I could be a writer seemed like a pretty good investment of my time.

A few good decisions later, I moved to Montreal to study English literature and brought only one certainty with me: that we humans need but one thing to devote ourselves to and that this thing, for me, was the English language. I began my undergraduate degree in January 2016 and hadn’t applied to any other university.

I can’t recall the exact reasons you were my only choice; perhaps I just knew I needed to live in Montreal and study in English – but not at McGill – ideally creative writing. Toronto was too expensive, and the United States was but an unattainable dream. I didn’t know why you specifically, but I picked you – and I had no idea how much you would come to mean to me.

Three and a half years later, after graduating with distinction in English Literature and Professional Writing, I realize how much I’ve learned and developed. I went from writing cringeworthy English prose to getting paid to write by American companies and getting articles published. I can also see the hardships, the failures, and the doubts – the moments when I wondered if I’d made the right decision to study in my second language.

Amid all this confusion, though, there’s one thing I always knew for sure: you welcomed me with open arms, making me feel like I belonged and would succeed. This kept me going. I never once thought of giving up.

As I look back to my undergraduate work at Concordia, what I see is a quest for self-realization made possible by a great university, a university that cares. The people I encountered here encouraged me and made the challenge fun. I still have much work to do, but the dreams I had did become true with you: I became fluent in English, I can be published – and paid – in my second language and, most astonishingly, the United States no longer feels like an unattainable dream. In the fall, I moved to Pennsylvania on a Fulbright fellowship.

Many other good things happened during my undergraduate degree, but these three things alone made every second with you worth it. There’s too much for me to say thank you for. This note is, in fact, an edited version of a letter I published on Medium. Even then, I feel like my words cannot possibly express how important you’ve been to me. I can say that I’ll always be one of your most grateful and proudest alumni, but this will always be an understatement.

He studied abroad at the University of Nottingham in England and is now a Fullbright foreign language teaching assistant at Lycoming College in Williamsport, Pennsylvania.