I received my PhD in English from the University of California, Santa Barbara (2013), and I also hold an MFA in poetry from Boston University (2012). My research draws on modern and contemporary Anglophone literature, science and technology studies, media philosophy, and poetics. My current project, The Molecular Age, examines a shifting aesthetics of “liveliness” across 20th/21st century Anglo- American culture – an era where the molecular sciences have transformed the parameters of vitality. Employing feminist and ecocritical theory, I identify epistemologies of the "vital" around scientific paradigms such as hygiene, mutation, plasticity, etc.  These intellectual trajectories, I argue, have altered political understandings of agency in ways that remain unobserved in studies of aesthetics and science. Furthermore, they challenge biopolitical formations that have often ignored materialist genealogies from the sciences.

In addition to my academic work, I have also published creative and critical work on poetry in numerous publications including The Boston Review, Guernica, Rattle, Black Lawrence Press, Memorious, Redivider, among others. My two chapbooks, Organ Speech (Corrupt Press) and Some Citrus Makes Me Blue (Dancing Girl Press), were published in 2011 and 2012, respectively. My first full length collection of poetry, The Kingdom and After, is forthcoming in fall 2014 with Tightrope Books. 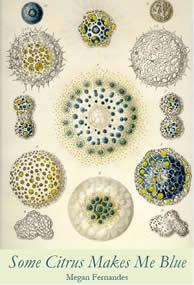