Surabhi Ghosh received her MFA in Fiber from Cranbrook Academy of Art and her BFA in Fabric Design from the University of Georgia. Prior to joining Concordia University in 2014, she taught at the University of Oregon and the School of the Art Institute of Chicago.

Ghosh’s work and collaborative projects have been exhibited at venues including the Wing Luke Museum (Seattle, WA), the Museum of Contemporary Craft (Portland, OR), and the Jordan Schnitzer Museum of Art (Eugene, OR).

Her work is included in several collections such as the University of Chicago Rare Books Collection, the Museum of Contemporary Art Chicago, and the Joan Flasch Artists' Book Collection. She recently participated in artist residency programs at Ox-Bow (Saugatuck, MI) and SPACE (Portland, ME).

From 2004 to 2013, she was cofounder and codirector of an international artists’ cooperative and annual publication project known as Bailliwik. From 2012 to 2014, she was also a codirector and member of Ditch Projects, an experimental artist-run space in Oregon.

Surabhi Ghosh’s research stems from the liminal power of decorative patterns—the visual phenomena that permeate the edges of the spaces we inhabit. Constantly observed but frequently disregarded as a visual subject, ornamentation hides in plain sight. What is the communicative function of ornamental patterning in (private) daily life and (public) cultural spaces? Where is it positioned in systems of belief, value, and political power? When inspected, this marginalized information acts in the creation of place identity, traces shifts in cultural identity, and reveals competing narratives.

Her work maps points of intersection between abstraction, minimalism, and ornamentation while expanding on a speculative understanding of these and other imbricated histories. Repositioning ubiquitous and universal motifs—circles, dots, hexagons, and stripes—she builds complex compositions through accumulative mark-making. For example, she applies hand-cutting techniques to a utilitarian material (upholstery vinyl), upsetting its function and enabling its (mis)behaviour (drooping, curling, sagging, suggesting,gesturing). She attempts to construct patterns incrementally; her handmade geometry will never result in a “true” pattern.

Most recently, in a body of work titled Ananta Undone, Ghosh considers how repetitive pattern reconciles the limits of human experience within the infinite universe. Deploying fundamental motifs—such as the block, circle, and stripe—she alludes to a range of ways humans have attempted to conceptualize or describe infinity: Hindu philosophy, geometric models, repetitive mark-making, bolts of fabric, grains of sand. But her idiosyncratic materials interfere unpredictably in these metaphysical pursuits, and through manipulating them by hand she reveals an inevitable human finiteness. 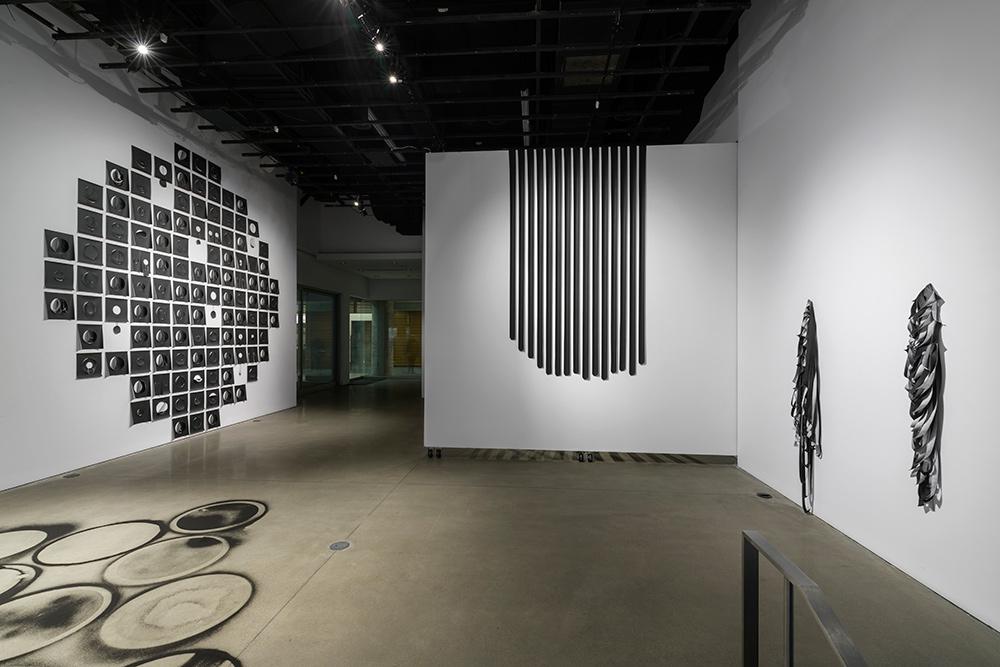