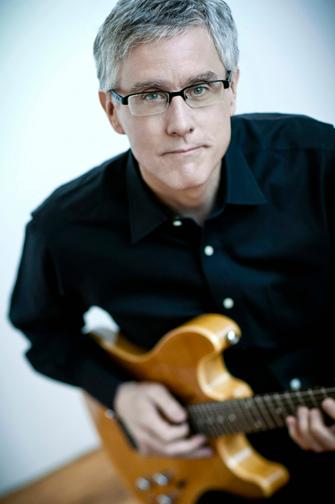 Composer / guitarist Tim Brady simply defies categorization - an electric guitar virtuoso who writes operas, plays concertos and feels ascomfortable with a laptop electronic improvisation or jazz group as with a string quartet. His solo concerts concentrate on the multi-textured music hehas been creating for solo guitar and electronics for the past 30 years.  The guitar as orchestra - from intimate solos to massive multiple guitar loops and samples, the music is a highly personalsynthesis of new music, jazz, rock and electronics.

For the past 30 years he has toured Canada, the United States,Australia and Europe both as a soloist and with his group Bradyworks.  In 2004 he was awarded the Prix Opus asComposer of the Year by the Conseil québécois de la musique, and in 2007 he wasawarded the Jan. V. Matecjek award by SOCAN. He has performed at many national and international festivals andevents, including the Montreal International Jazz Festival, Festival Présence in Paris, The South Bank Centre (London, UK), the Darwin Guitar Festival in Australia, the Festival international de musique actuelle de Victoriaville, andin 2010 he was distinguished guest composer at the Winnipeg SymphonyOrchestra’s international New Music Festival. From 2008 to 2013 he was composer in residence with the Orchestre symphonique de Laval.  His 2013 CD, “Atacama: Symphony #3”, was named “Création de l’année” for 2012 at the Prix Opus, and was nominated for a JUNO award in 2014, in the category, Best Classical Composition.

In 2015-2016 he released three CDs: the orchestral CD "The How and the Why of Memory" (with Symphony Nova Scotia), "Instruments of Happiness" electric guitar quartet, and "Of Sound, Mind and Body" - an improvisational quartet CD.

His innovative new works for 100 electric guitars (2015, 2016) have played to sold out performances in Montréal, at the 2016 Modulus Festival in Vancouver and at the 2017 Stratford Summer Music Festival.  His chamber opera "Ghost Tango" was premiered in Halifax in September 2015 to glowing reviews, and the "Instruments of Happiness" guitar collective was featured at the 2016 Sound Symposium Festival in St. John's, Newfoundland, and on an 8-concert Canadian tour in March and April 2017.

As artistic director of one of Montreal’s best-known new music groups, Bradyworks, he has commissioned and performed dozens of new pieces byQuebec, Canadian and international artists. From 1994 - 2004 he was the founding artistic director of Innovations enconcert, one of Montréal’s most important new music producers.  He is a past president (2005-2014) of the Canadian New Music Network, and serves on their Digital Content committee.

His chamber and orchestral music is often influenced by strongjazz and rock rhythms, combined with a subtle sense of harmony and texture, anda flair for dramatic forms and structures. Delicate melodies inhabit the same world as dense, jagged, syncopated chords, giving the music a sense of openness, surprise and intrigue.  21 CDs, 3 operas, 6 symphonies, and dozens of international tours later, his music continues to engage listeners around the world.