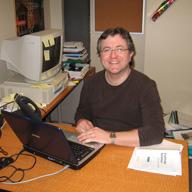 Mr. Robert Panenic joined the Department of Exercise Science at Concordia University in the Fall 2000 semester as a Limited Term Appointment (LTA) junior lecturer. Initially, he taught two elective courses that were offered to Concordia University's general student population, namely: EXCI 233, Current Issues in Personal & Community Health, and EXCI 251, Fundamentals of Health & Physical Activity. Four years later, in 2004, he was accepted as an Extended Term Appointment (ETA), which allowed him to retain his status as a junior lecturer in the department.

Henceforth, in the Fall 2004 semester, he began a new workload allowing him to teach four courses within the Department of Exercise Science.; These courses included: EXCI 200, Introduction to Exercise Science, Physical Activity & Health; EXCI 261, Physical Activity Programming For Health & Performance; EXCI 342, Fitness Assessment & Exercise Intervention; and EXCI 452, Essentials of Strength Training & Conditioning. One of his mandates was to uncover content overlap in these four courses and suggest replacement courses to the departmental curriculum committee (DPC).

As of the Fall 2007 semester, he will begin teaching one of these replacement courses, which is called EXCI 252, Introduction to Physical Activity, Health, and Fitness. The following year, he will be teaching EXCI 352, Essentials of Exercise Testing and Training in Athletic Populations, which replaces the EXCI 452 course. Finally, in 2009, he will teach EXCI 450, Physical Fitness Assessment, Exercise Prescription and Rehabilitation in Special Populations, which is primarily intended for students registered in the department's Clinical Exercise Physiology department.

Presently, Mr. Panenic is not involved in any kind of research because his main responsibility is to teach courses at the undergraduate level.

Panenic, R., and P.F. Gardiner. The case for adaptability of the neuromuscular junction to endurance exercise training. Canadian Journal of Applied Physiology 23(4): 339-360, 1998. [Review]