Infrastructure as a health priority

When you mention health care and hospitals, engineering comes to mind. Yet keeping health care institutions in tiptop shape and ensuring that the day-to-day maintenance and renovations of their infrastructure run without a hitch can be just as challenging as diagnosing an illness or setting broken bones. And if you do it wrong, the consequences can be almost as serious. 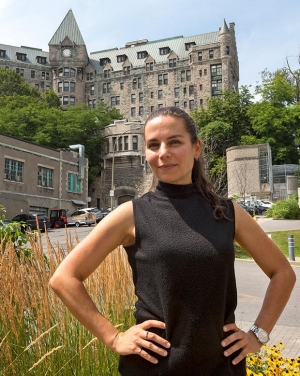 Muriel Sabbag, pictured near the former Royal Victoria Hospital, is a project manager for the McGill University Health Centre.

As a project manager working for the McGill University Health Centre (MUHC), Muriel Sabbag, BEng 96, knows how important proper planning is. Much of her work involves the careful preparation and execution of building and renovation jobs large and small, each with its own set of challenges and each needing special consideration.

“In a hospital, there are so many different sectors, and projects are often awarded as funds become available,” she says, describing the constantly shifting nature of her work. And the budget of the project doesn’t always correlate to how difficult it will be. “We’ve had projects that cost as low as a few thousand dollars and others of a few million,” she says. “All have their own level of complexity. If it is less costly, it is no less challenging.”

Sabbag has been at the MUHC for the past dozen years. She’s keenly aware that attention to detail is critically important when working on planning for such a large and vital institution. “We can’t miss a plug or a light; someone might die,” she says.

The MUHC has certainly been front and centre in Montreal’s infrastructure boom of the past few years. The long-gestating superhospital at the Glen Yards site in the city’s west end finally opened its doors in spring 2015. While Sabbag wasn’t involved with the MUHC’s amalgamation of the Montreal General, Royal Victoria Hospital, Montreal Children’s Hospital and Montreal Chest Institute under one roof, she remained as busy as anyone else.

“Because certain existing buildings have remained open, we must keep them operational and strive to offer the same standard as the Glen,” she explains. “All project managers in our department work diligently towards that goal.”

Sabbag joined the MUHC following project manager stints working at Montreal’s Jewish General Hospital and for the City of Cote-Saint-Luc, Que. She relates that she was always attracted to engineering, describing herself as “very much a tomboy” when she was younger and being good at math. Sabbag adds that she “liked to challenge male-dominated fields like engineering.”

She also credits Concordia for giving her the skills to work with colleagues in a way that is cooperative rather than cutthroat, where teamwork is more important than trying to elbow your way into the spotlight. “There was a spirit of camaraderie at Concordia that you don’t necessarily find elsewhere. That had a big part to play,” she says. “You get this feeling that we’re all in this together, that it’s really a joint effort.”

Two decades after she graduated, Sabbag remains in touch with some of her former classmates, finding time to catch up and meet for a cup of coffee. She is quick to point out that although her hours in the classroom were busy and challenging, the time spent outside university with her fellow students had its own rewards. “The philosophy of engineers is, ‘Work hard and play harder,’” she says. “It was all incredibly fun.”