Health care from the inside out

As Fady Gabriel, MEng 15, describes it, designing and building superhospitals like Montreal’s Centre Hospitalier de l’Université de Montréal (CHUM) requires an approach that’s the reverse of other projects. “Most buildings are built from outside to inside,” he says. “A hospital is from inside to outside.”

The native of Cairo, Egypt, explains that hospitals need to put the patients’ needs first, so their builders have to keep that foremost in mind when planning them. 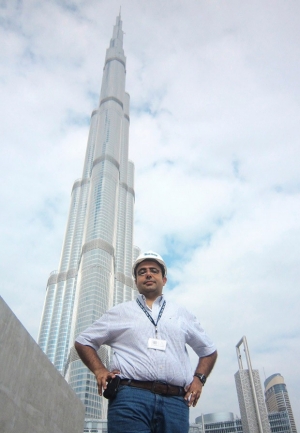 Fady Gabriel, pictured in front of the Burj Khalifa skyscraper in Dubai in 2009, takes pride in the work he has done on many major projects, including the Centre hospitalier de l’Université de Montréal. “You feel like you are helping to build and shape the future for Montreal, Quebec and Canada.”

“A simple example: when you do an electro-mechanical installation in an operating theatre, it can affect the life of a human being,” he says. “As well, infection control is very important, because hospitals are about infections. If they aren’t controlled, it can be very dangerous.”

Gabriel is something of an authority on the matter. He has been involved in building hospitals off and on since he earned his bachelor’s degree in architectural engineering from Cairo University in 1995. Between then and 2011, when he emigrated to Canada, he worked on major projects around the Middle East, including hospitals and hotels in Egypt and the $1.8-billion Cleveland Clinic Abu Dhabi in the United Arab Emirates, and at the Burj Khalifa in Dubai — currently the world’s tallest structure.

So when Construction Santé Montréal, the consortium created to build the CHUM superhospital began hiring, Gabriel leapt at the chance to work on that huge project.

Not long after being hired, he moved to Montreal and began working as a senior construction project manager on the CHUM. As if that wasn’t enough, in fall 2012 he enrolled in Concordia’s Master of Building Engineering and Construction Management program, graduating three years later.

Gabriel chose Concordia because of the reputation its Department of Building, Civil and Environmental Engineering’s construction management specialization enjoyed internationally, including in the Middle East.

When he began researching the various programs offered by the different universities in the city, he was most impressed by Concordia’s, which he describes as “one of the best in Canada for civil engineering.”

Gabriel feels he never lost the sight of the bigger picture while working on the CHUM. “You’re building something for your own family, for the people of Quebec, considering how many people and families will benefit, how the technology and the equipment inside it are so advanced.”

Gabriel joined SNC-Lavalin in November 2016 for another massive, near $6-billion Montreal infrastructure project, the Réseau électrique métropolitain (REM) rapid-transit line that will link Montreal’s West Island to the South Shore. He says his studies at Concordia helped prepare him for such megaprojects.

The courses offered in his master’s program “give you a lot of knowledge about construction in Canada — laws, cost, contracts, methods and means — and a lot of good feedback about construction in North America as a whole. There are a lot of courses about contracts in Canada, about contractual obligations, about labour laws,” he says. “Also at Concordia, we were very well connected with major companies, local and international. For example, some of our classes were offered by project directors at SNC-Lavalin, which gave us good connections with the company.”

Gabriel found the program’s mix of graduate and undergraduate students and its students’ diverse backgrounds were benefits that had real-world applications. “When you share experiences about international projects, it gives you more of a sense of how to do things regarding conceptual construction design,” he says. “In Montreal, there is a limited number of major projects, but around the world there are a lot of big projects. So sharing information about these is very nice.”