‘Working with students brings something new every day’ 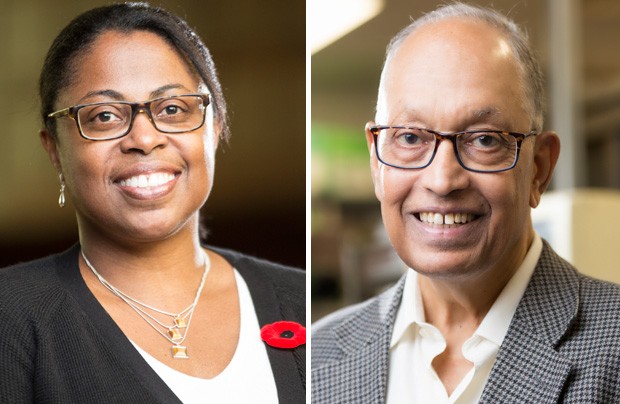 On December 4, Concordia is recognizing 194 recent retirees and employees who have reached milestones in their careers — from 20 up to 55 years of service.

Leading up to the annual Long Service and Retiree Luncheon, we are profiling some of this year’s honourees to both celebrate their important achievements and acknowledge their service, loyalty and dedication to the university community.

Sushil Misra: ‘I do it because it’s my passion’

When Sushil Misra first set foot inside the Henry F. Hall Building in 1966, it was brand new. A friend gave him a tour, hoping to impress the University of Toronto postdoc.

“The Physics Department at Sir George Williams University (SGWU) was trying to raise its research profile,” Misra recalls. “But I was also invited to stay on at U of T to continue my work in electron paramagnetic resonance.”

Over the following months, SGWU, one of Concordia’s two founding institutions, kept up the charm offensive. They offered Misra a tenure-track position, a National Research Council grant endorsement and the promise of new lab equipment — and it worked.

“It was the time of Expo 67, which was also really exciting. The only problem was that there were so many tourists in Montreal that it was nearly impossible to find an apartment.”

Misra had to adapt to circumstance, beginning his work at SGWU while living at a friend’s place. It was the first of many adaptations, including the merger with Loyola College in the 1970s and a hiring freeze in the 1990s that made it more challenging to undertake research initiatives.

“Then the freeze was lifted in 2005,” Misra remembers. “We hired more physics faculty, and were able to recruit top graduate students again. Now, the department is really thriving and getting support from the administration.”

Though a researcher at heart, Misra finds plenty of reasons to get excited about teaching.

“In my modern physics courses, I can teach a theory one day, then hear that it’s been proven the week after — like the Higgs Particle, gravitational waves or the varieties of neutrino.”

“I still do research every day, and still supervise graduate students. But I do it because it’s my passion and I still have momentum.”

And that momentum isn’t restricted to physics. Misra also uses it on the dance floor.

“Ballroom dancing is a lot like science. I study the steps like I would other forms of movement. I do salsa, rumba, cha-cha, foxtrot, tango and slow waltz. But the one I really want to perfect is the Vienna Waltz.”

Sandra Robinson: ‘It’s by seeing new places that you expand your mind’

Sandra Robinson also went from her own studies to helping others with theirs. A colleague describes her as “an admissions and advising rock star” — a compliment that makes her laugh.

She does travel a lot, but the stories she now focuses on come from the people behind each application file. As for teaching opportunities, she finds those in advising students.

“There are so many options available through the university, but a lot of students need help uncovering them.”

Before joining the Faculty of Arts and Science, Robinson worked for six years at the Birks Student Services Centre. She describes the experience as invaluable, adding that, in her opinion, everyone at Concordia would benefit from time on the public, front line.

“Working with students brings something new every day. I sometimes feel like they’re my kids,” Robinson says.

That feelings grows even stronger when graduates come back to visit.

“There’s nothing like the thrill of someone walking through your door and saying, ‘Guess who just got their doctorate!’”

Robinson also values the chance to help those whose path isn’t as clear.

“I always tell them to travel. It’s by seeing new places that you expand your mind and learn about your world.”

She reminds students that they can adapt their degrees to their curiosities with study-abroad programs or minors.

The one change she finds a little painful, however, is when colleagues retire.

“It’s hard when they go because they embody so much knowledge. I’ve worked with so many amazing people here. I’ve seen Concordia grow a lot, but it never loses its community feel.”