‘It’s so powerful to find places of belonging’ 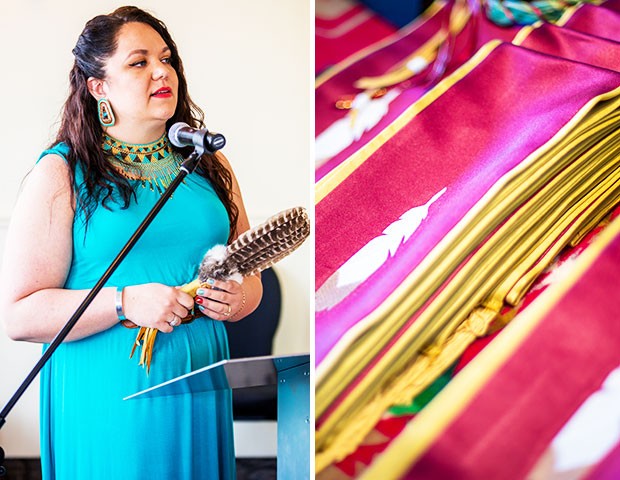 Shiann Whitebean: “Concordia gave me a chance to pursue my dreams.”

Concordia’s president Alan Shepard was joined by Andrew Woodall, dean of students, in congratulating the former undergraduate and graduate students at a special gathering hosted by the Aboriginal Student Resource Centre.

“I am so pleased to see so many students from Indigenous backgrounds graduating from Concordia,” Shepard said, after referring to the university’s territorial acknowledgement.

“These students come from all different sectors of the university, representing all the Faculties, from Engineering to Creative Writing to First Peoples Studies to Business — the diversity of the institution is captured by this group of graduates.”

Shiann Whitebean, who received her bachelor’s in First Peoples Studies, shared her story with the crowd.

“As a mature student, Concordia gave me a chance to pursue my dreams,” she said. “I am 34 and have three children. I was a teen mom, so I never finished CEGEP.”

Whitebean says her decision to return to school was largely a result of the example set by her mother, who decided to start university after having six kids.

“I want people to know that you can always go back and pursue your education. It’s a tremendous challenge to be a mother and a student, and I thought I would be coming in an underdog. But due to the support system here at Concordia and my own determination, I have been successful.”

Whitebean was one of eight valedictorians to address Concordia’s class of spring 2017. She was also a member of Concordia’s new Indigenous Directions Leadership Group.

Lance McComber, who graduated with a bachelor’s in Civil Engineering, talked about the challenges he faced during his capstone year and how the experience gave him a new perspective.

"Often times I would look at my peers and filter out all the negative aspects of their projects while disregarding the great aspects of my own. But in the end I was successful," said McComber, who encouraged everyone listening to keep chipping away at their dreams.

"You have to push through the difficult times and the self-doubt. Give yourself a break and stop comparing yourself to others,” he added.

“Enjoy the small, mundane moments because those are our moments, those are the moments great accomplishments are built upon." 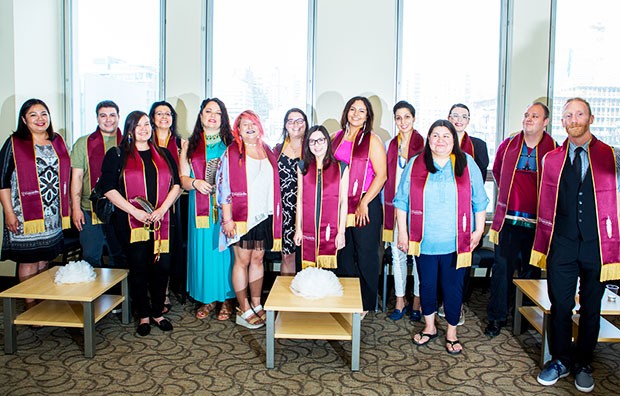 In her address, Elizabeth Fast— Concordia’s special advisor to the provost on Indigenous Directions — also spoke about her personal journey.

“All my life I’ve struggled to find my place,” she said, adding that as the child of a Mennonite father and a Metis mother, she found it difficult to reconcile her identity.

“My mom was told by her parents to identify as Franco-Manitoban. She grew up knowing she was one person but having to tell the world she was another. When my grandfather was young, you could get shot in the street for saying you were Metis. This fear and hiding has followed us — my brother, my mom, my cousins.”

After 10 years working in the child welfare system, Fast was left distraught by the cycle of Indigenous family separation. She decided to pursue higher education in order to affect meaningful change.

In 2015, upon achieving her PhD, Fast was hired as an assistant professor at Concordia. She soon began helping the university fulfill the recommendations set out by Canada’s Truth and Reconciliation Commission.

“It’s only as I’m approaching my 40th birthday that I’m beginning to feel whole,” she said.

“I’ve come to see how powerful it is to find places of belonging, and how much this can help us survive or even thrive in institutions that were built on Western and colonized foundations.”

The assistant professor in applied human sciences pointed out the important role played by the Aboriginal Student Resource Centre in this regard.

“For many Indigenous students, this is a safe space, a place of belonging,” she said.

"It’s vital to our students, the staff are wonderful and it makes a profound contribution to the university community.”

To close the gathering, graduates were presented with a maroon and gold commemorative stole adorned with a feather — symbolizing strength, wisdom and honour — as well as the Concordia logo.