Convocation 2017: 'Soar above all obstacles'

The university's 5,430 spring graduates look to the future
|
By Meagan Boisse 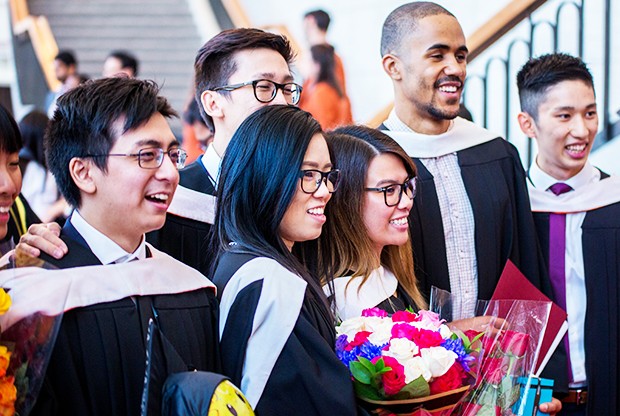 At spring convocation on June 5, 6 and 7, Concordia's president Alan Shepard joined honorands and valedictorians in offering his best wishes to the class of 2017.

“As we celebrate, it’s important to take stock, to remember that today is also about the bigger picture,” Shepard said to the university’s newest graduates.

“Your own education, from kindergarten to a university degree, is also an investment in the greater social fabric and making our community stronger.

“Your education doesn’t stop when you graduate from university, because education is a lifelong process and increasingly so as the pace of our knowledge society keeps getting faster. Concordia has prepared you to make sense of our complex world and to become leaders in it.”

Eight valedictorians also provided sage advice. In their speeches, both Oreoluwa Albert Ajayi and Jana Ghalayini spoke about tragedies they endured during their studies.

Ajayi, who graduated with a bachelor’s degree in electrical engineering, began by recalling his humble upbringing in southwest Nigeria and how the support of his family propelled him toward his studies at Concordia.

"My father believed the best gift he could ever give his children was to educate them,” he said. “He passed away unexpectedly in March as we were discussing plans for him to attend today’s ceremony."

Filled with grief and anger, Ajayi lost his motivation to complete his final term. Eventually, he summoned the necessary resolve, determined not to disappoint the memory of his father.

“We are future engineers and scientists, we carry on our shoulders the hopes and dreams of mankind, so we have no choice but to soar above all obstacles.” 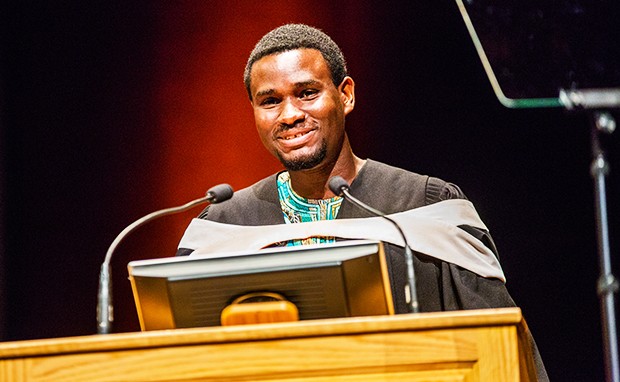 Ghalayini, who graduated with a BEng in Mechanical Engineering, also faced personal hardship during her studies. Her mother was in intensive care for two months of her capstone year due to heart failure, an experience that also nearly made Ghalayini leave school.

“The guidance and support system I found here at Concordia amid my classmates and my professors, the Dean of Students Office and the dean himself gave me resolve,” she said.

“We have all helped give each other the power to overcome obstacles and transform them into the will to succeed, and we owe this to each other and the Concordia community as a whole.”

Governor General’s Literary Award winner Kim Thúy came to Canada at the age of 10 as a Vietnamese boat person. Her message to the class of 2017 was to keep in mind the importance of small gestures even as they begin to chase their bigger dreams.

“A call from a mentor, the suggestion of a book from a teacher, or the hugs of my sons — these small gestures matter,” she said.

“We rely now on the big ideas you have and the realization of the big projects you will do to make all of our lives better. But please, as you dream big and bigger do not forget the small gestures along the way.”

Canadian Senator Chantal Petitclerc is the most successful wheelchair racer of all time. In her address, she recounted how at the age of 13 she lost the use of her legs when a barn door fell on her.

“What I learned from that experience is that in situations where you lose control over everything, the only control you retain is over your own emotions and attitude. No matter what happens to you, life does not stop,” she said.

“You may have to change direction sometimes, but you always have more potential than limits, and it was this mindset that took me to five Paralympic Games.”

Economist and writer Robert Calderisi devoted his career to the development and administration of aid to some of the poorest nations on earth.

Calderisi told the audience of Concordia graduates, family members and friends about a West African nurse he met while serving as the head of the World Bank in Africa. He recalled how her singular drive led to the revamping of her community’s clinic.

He then balanced the nurse’s story against a quote from novelist Arnold Bennett: “What you're living now is life itself — it is much more so than what you will be living 20 years hence. Grasp that truth, let it influence your conduct so that neither the present nor the future be neglected.”

J. Sebastian van Berkom is a philanthropist and leader in the financial sector. After receiving his degree from Sir George Williams College, one of Concordia’s founding institutions, he went on to build two highly successful small-cap portfolio management firms.

“I wanted to share the challenges I’ve faced in my life and career to help you understand the importance of a good education,” he told the graduating class.

“But even more so, how important it is be determined and focus on something you dearly love to do each and every day of your life as a job. This way your work becomes your passion and your hobby, which can lead to great success.”

Business woman and cosmetics trailblazer Lise Watier started her successful brand in 1972 and has stayed at the forefront of the industry ever since. In her address to the graduating class, Watier recalled her modest beginnings, growing up in Montreal’s east end in an underprivileged family.

“Everything begins with a dream,” she said. “Your dreams will fuel your ambition, and your ambition will be your motivation to go beyond. The passion you put into what you do will lead you to your goal.”

“The difference between adversity and adventure is attitude,” he said. “You’ll probably fail a lot but at some point, you will succeed. And that success will be based on the lessons learned in failure.”

“You must ask what you want in life,” said Mohammed, who then recounted some of his most pivotal moments: asking for a scholarship to Concordia, asking for his wife’s hand in marriage and asking his first investors for a business loan.

“Do not let the deterrent thoughts you sometimes have stop you from asking for what you want,” he told the graduating class.

David A. Martin, cofounder of SMART Board interactive whiteboards and a recognized expert in educational technologies, spoke of the trials and tribulations he faced trying to get his invention off the ground.

“In the beginning, we struggled in trying to finance the creation of the first SMART Boards and were rejected multiple times,” he said.

“With little sales and many obstacles, we continued. We continued because we believed in what we were doing, we believed in each other and that if we worked harder we would succeed. We call these the little tricks of success. They are inspiration, perspiration and perseverance. Today there are more than 5 million SMART Boards in classrooms across 120 countries.”

Grammy- and Juno Award-winning singer Measha Brueggergosman likened singing to life. “You strive for the high notes, you blend into the harmony and if you forget to take rests it all falls apart,” she said addressing graduates from the Faculty of Fine Arts.

The versatile singer encouraged them to diversify their skills, explaining how she extended her own repertoire to include everything from classical to jazz, even trying her hand at acting. “The more dimensions of yourself you develop the more opportunities you give yourself,” she added.

“I have my classical training to thank for making all this possible, but I can’t tell you how much more rewarding music is to me because I’ve followed my passion in its many forms. I would encourage you to learn new skills and play new roles, it makes life so much more exciting.”