Convocation 2016: ‘Be courageous and innovative’ 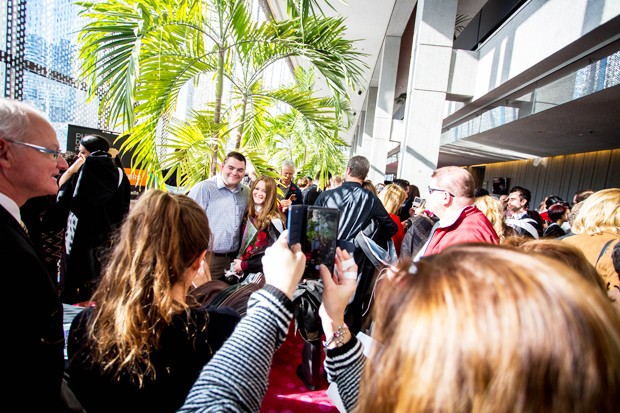 The atmosphere was convivial. The attendees were jubilant.

“Concordia was and remains ahead of its time,” Shepard said to the assembled audience of graduates, friends and family members.

“In knowledge economies around the world, collaborative networks integrated into their local communities will displace exclusive ivory towers. The Concordia of today has equipped you for your future in a world that admires your can-do attitude and entrepreneurial energy and your ambition to make the world a better place.”

Of the more than 1,600 students from the university’s four Faculties and the School of Graduate Studies who graduated this fall, 932 walked across the stage at Théâtre Maisonneuve in Place des Arts, which was decorated in festive autumnal tones.

‘Progress and change now squarely lie in your hands’

In his opening remarks, Concordia's chancellor Jonathan Wener focused on the future.

“Our backgrounds and circumstances may have influenced who we are, but we are all responsible for who we become,” he said.

“You must continue to be open with outstretched arms and open hands, to be willing to receive and also to give. Define success by the degree to which you positively affect people in your lives. Progress and change now squarely lie in your hands,” he said.

‘You have chosen light over darkness’

During the Faculty of Arts and Science convocation ceremony, honorary doctorate recipient Nahlah Ayed recalled her circuitous academic route to graduate school in journalism, then noted the perilous state of the world the graduates face today.

“You happen to be pursuing your dreams in a world that is on the precipice of a new kind of uncertainty,” said Ayed, a foreign correspondent for the CBC and the author of the memoir, A Thousand Farewells: A Reporter’s Journey from Refugee Camp to the Arab Spring.

“Never before has the world quite looked the way it does now, in November 2016. It's a time when intolerance has again gone mainstream, when it has become far easier to highlight differences than to look for common ground, when news is sometimes served up by algorithms and when truth, frankly, has become optional.”

Highlighting the plight of Syrian refugees, she reminded the audience how fortunate they are: “But for the random fate to be born in a place that no one would willingly choose, very little separates them from you and me,” she said.

“You too have chosen light over darkness — to struggle and strive to reach for the certainty of knowledge over the seas of ignorance, to drift away from dead ends, to possibility. The difference is you've been doing it without risking your life.”

Ayed is best known for her reporting from the Middle East, notably during the United States–led invasion of Iraq in 2003 and the 2006 war in Lebanon. She has also covered humanitarian crises, including the ongoing exodus of Syrian refugees to Europe.

“Don't be afraid to think big and do justice to the sheer size of [your family’s] ambitions for you. I urge you to draw inspiration from your own potential to do good — not just here in Canada, but around the world. Having hope is the only way to ensure your dreams are realized. Also, be patient — especially with yourselves, because sometimes there is no avoiding the long way to realizing your dreams.”

‘You are more prepared than you think’

Derek Kyle O'Flaherty, valedictorian for the Faculty of Arts and Science and winner of the Governor General’s academic gold medal, spoke about what he learned from a failed research project.

“It’s a time to pick yourself back up and re-evaluate. Keep pushing forward,” said O’Flaherty, who received his PhD in Chemistry.

“It's important to realize that our future isn't defined by the diploma sitting in our hands. Rather, we must be confident in the skills we've acquired at Concordia. Think of it as a handbook of knowledge and tools and skills for the next step. You are more prepared than you think you are.”

O’Flaherty wasn’t the only Governor General academic medal winner that morning. Charlotte Roddick took the stage to receive the silver medal, awarded to the undergraduate who finishes their degree program with the highest marks.

Provost Graham Carr ended the ceremony by congratulating graduates, and asking them to thank their support network.

“Hardly anybody gets anywhere in life on their own,” he said. “We all need mentors, partners, collaborators, inspiration, supports, encouragement, sometimes a hard reality check, or just a stroke of good luck.”

‘Mediocrity is not good enough anymore’

“Why? Because for the graduates of this university to succeed in today's globally competitive reality, change, disruption and innovation have to be our weapons of choice,” said Rovinescu, who has been president and CEO of Air Canada since 2009 and has served as board chairman of Star Alliance and the International Air Transport Association.

“When it comes to global competitiveness, you can't legislate innovation, but you can certainly inhibit it by being just average. Let's face it; mediocrity is not good enough anymore. Not in science, not in tech, not in business, not in universities, certainly not in a hyper competitive world where risk taking and speed will play a much greater role in defining success.”

Prior to his tenure at Air Canada, Rovinescu was the managing partner of the law firm Stikeman Elliott, specializing in business law. He is also the co-founder of Genuity Capital Markets, a leading independent investment bank.

“Now, as you embark on the stages of your life, primed to succeed, be unreasonable in your expectations,” he advised. “Be aware, audacious, and make our presence known in your communities. Be courageous, innovative, and speedy in execution. The passage of time is arrogant and will not wait for you. While today is for reflection and congratulations, tomorrow is for execution and success.” 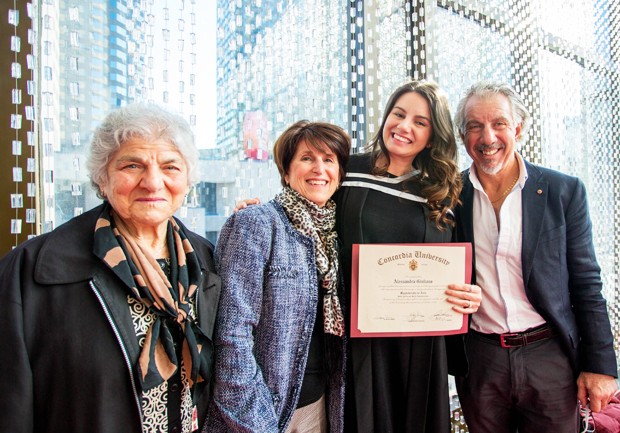 ‘We have undeniable responsibilities’

In his address, John Molson School of Business (JMSB) valedictorian Hosein Maleki shared several important lessons he learned at Concordia, including the realization that graduates have a debt to their communities.

“I learned that we have undeniable responsibilities to our societies, particularly as our world today is suffering from heightened inequalities and an increasing economic divide,” said Maleki, who received his PhD in Administration. “It's now clearer than ever that we can lead safer and happier lives when the wealth of our nations is better distributed across global economic participants. ”

He also learned that academia can have real impact on the outside world.

“Our findings, as researchers, can improve companies, markets and economies, and contribute to creating a better world.”

‘Pick a good problem to solve’

At a joint ceremony for the Faculty of Engineering and Computer Science (ENCS) and the Faculty of Fine Arts, Concordia honorand and computer scientist Maria Klawe, discussed how to lead a life that will have impact.

“Until I was in my mid-30s, I thought that achieving long-term impact was mostly influenced by one’s ability. I was wrong,” said Klawe, president of Harvey Mudd College in California and an advocate for women and minorities in engineering, science and mathematics.

“It turns out, the most important things are: number one, pick a good problem to solve; two, persist and work hard; and three, re-evaluate your approach. Everyone is capable of doing great things.”

Klawe worked in research and management at IBM and held professorships at Oakland University and the University of Toronto. She also served as vice-president of Student and Academic Services at the University of British Columbia, as well as dean of Engineering and Applied Science at Princeton University.

She offered three pieces of advice to graduates: pursue your passion where it’s needed; be open to the unexpected and unwanted; and it’s never too late to learn something difficult.

“I wanted to do math when the world needed computer scientists…so I did a second PhD,” she said. “If there’s something you love, it’s possible to find a way to interweave it into your life.”

Her fellow honorand that evening, Régine A. Chassagne, revealed a recent discovery connecting her family to Concordia: her father completed an undergraduate degree in math at Concordia, while her late mother did a Spanish literature degree, then worked in the university’s office of the Department of Engineering.

“She’d be blown away to see me up here,” said the musician and philanthropist, who has been a dedicated supporter of Haiti, the country where her parents were born. She has worked with Partners in Health as well as the KANPE Foundation, which she co-founded to battle poverty through sustainable solutions.

“I couldn’t have founded KANPE without the knowledge I acquired in the Department of Communications at Concordia,” she said.

Chassagne thanked her sound teacher, Iain Cook, for allowing her to grow, and stressed the importance of being “open” to whatever life presents.

A founding member of the music group Arcade Fire, Chassagne (BA 98) is a multi-instrumentalist, singer and songwriter. The band has won popular and critical praise around the world, as well as a Grammy for Record of the Year in 2011.

“Be kind. Be good, do good and go for it!” she concluded.

‘It’s your turn to carry the torch’

Wrapping up the night was an appeal from Faculty of Engineering and Computer Science (ENCS) valedictorian Sara Ayoubi, who received her PhD in Information and Systems Engineering.

“Think of the people who played a major role in your life. Think of their characteristics, their values and the part they played in your success story,” she told her fellow graduates.

“As you begin your next endeavour, remember, it’s now your turn to carry the torch — to ‘pay it forward.’ Be the altruistic teacher who sees and harnesses potential. Be the inspiring leader and mentor that cultivates others qualities they never knew they had, or the devoted parents that loves unconditionally… Be the person you needed when you were younger.”