A long-time champion of Concordia University has been named its new chancellor. Jonathan Wener, chairman and CEO of real estate development firm Canderel will take over the role on January 1, 2015, from L. Jacques Ménard, who has been chancellor since 2011. Wener has been the university’s deputy chancellor since 2012.

Wener graduated in 1971 with a Bachelor of Commerce from Sir George Williams University, one of the two institutions, along with Loyola College, that merged in 1974 to form Concordia. 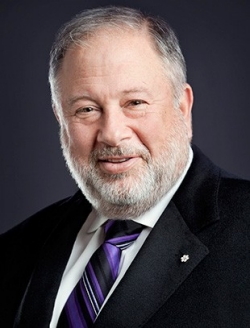 Under Wener’s leadership as deputy chancellor, Concordia drew up a plan to revitalize its downtown campus by renovating existing buildings and embarking on the construction of several new ones to meet the growing needs of the academic community. In the past two decades, Wener has overseen the construction of two distinctive new buildings that helped change the face of the campus: the Engineering, Computer Science and Visual Arts Integrated Complex (EV) and the John Molson School of Business (MB).

“Quartier Concordia is the vibrant neighborhood it is today thanks in large measure to the vision of supporters of the university such as Jonathan Wener,” he says. “The recently transformed Grey Nuns Building is merely the latest of several renovations and new construction he had a hand in steering to successful completion.”

Norman Hébert Jr., chair of the Board of Governors, has described Wener’s appointment as a continuation of the fine tradition of Concordia alumni serving their alma mater.

“Both Jonathan Wener and L. Jacques Ménard, our outgoing chancellor, are among the devoted alumni Concordia is grateful to count at the forefront of its supporters,” says Hébert. “They are leaders in their respective fields and also believers in giving back to their community.”

Beyond his commitments at Concordia, Wener has served as a member of various community, business and charitable boards.

In 1989, he launched the Défi Canderel, a high-profile fund-raising initiative. Each spring, teams from a variety of organizations run through downtown Montreal to raise funds for cancer research. The Défi has raised more than $9.7 million in its 25-year history.

“Community service is in the DNA of a man like Jonathan Wener,” says Ménard. “That’s why he has given so much of his time, expertise and energy to a variety of organizations devoted to education, culture and health.”

Wener is happy to return the compliment.

“My years at Sir George Williams University were instrumental in preparing me for the entrepreneurial life I embarked on after graduation,” says Wener. “It’s been a joy for me to help in a transformation that allows Concordia to be widely recognized as the excellent institution I know it to be.”